They kinda do that to him in episode 4. There are people outside the wall who are sent back out because they aren’t “special”, and Lenka speaks up, but he gets told by his superior to stop, and that it’s beyond their control. Even though those people aren’t in immediate danger, being kicked out of the gated city is basically sealing their fate as dead eventually.

That doesn’t sound like what I was talking about.

Yah, I did say I only watched the 1st episode.

Sorry about the spoilers. I thought about blurring it out, but I didn’t think they were major spoilers.

Haven’t had one of these in awhile! 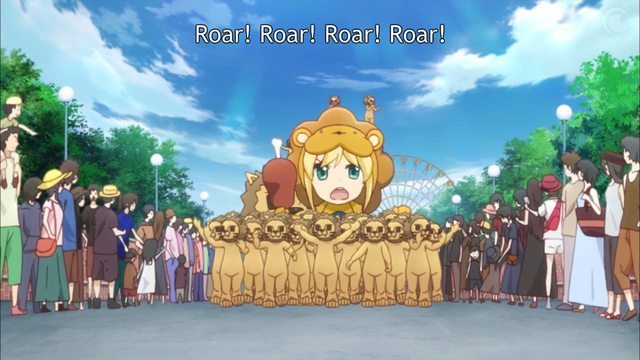 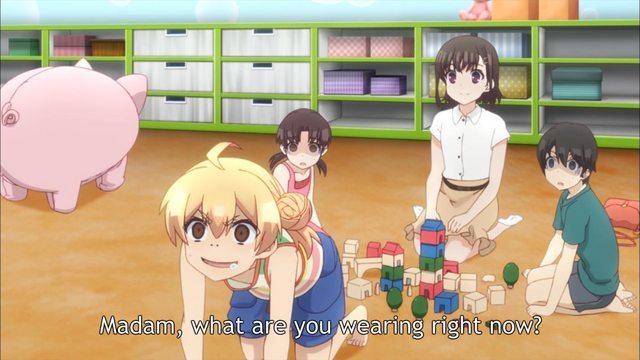 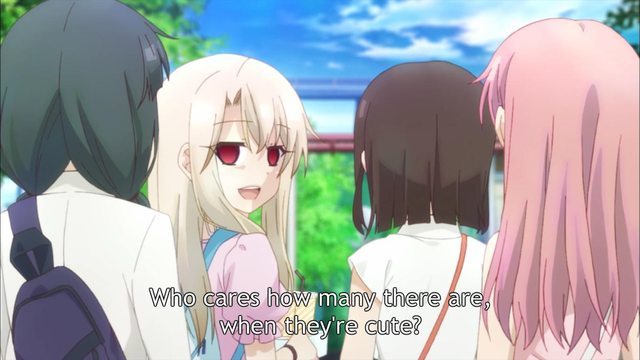 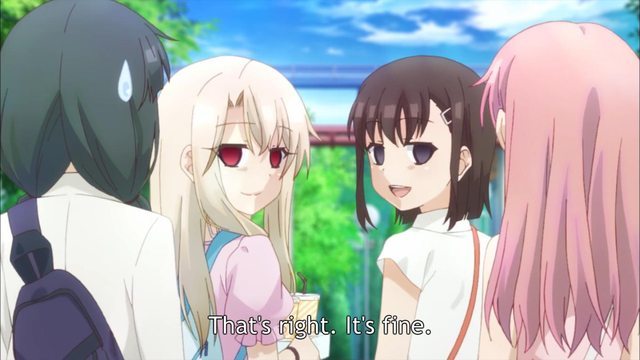 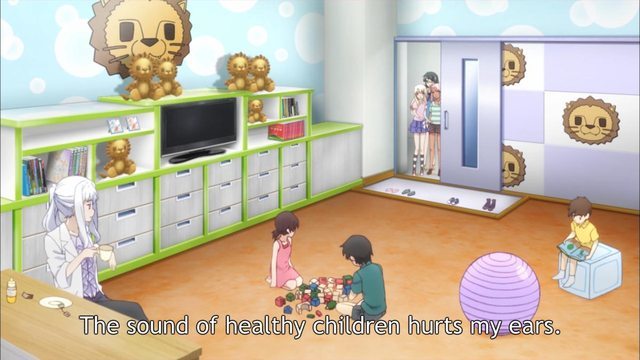 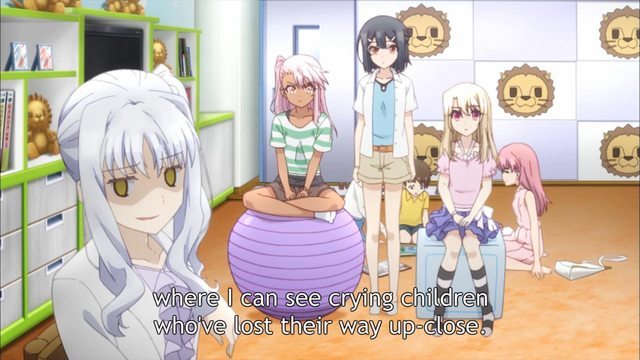 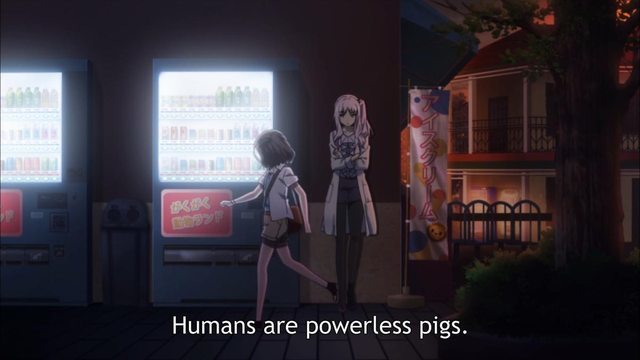 I fucking love Caren-sensei. She’s related to a certain someone and I really hope they (Ufotable) someday adapt Fate/hollow ataraxia, which seems to be the sequel to Fate/stay Night. I kinda wish it already existed though since it looks like she might become a key figure moving forward. Like, what exactly is her deal! I want to know so bad! 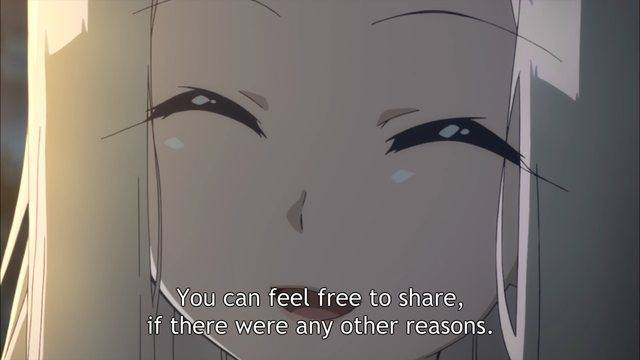 I mean, Iri was mean mugging the shit out of her. She hasn’t been short with anyone before!

As much as I liked the last couple eps, really itching for some action. I think that’s chibi Gilgamesh??? I don’t know of any other Fate dudes with blond hair and red eyes. 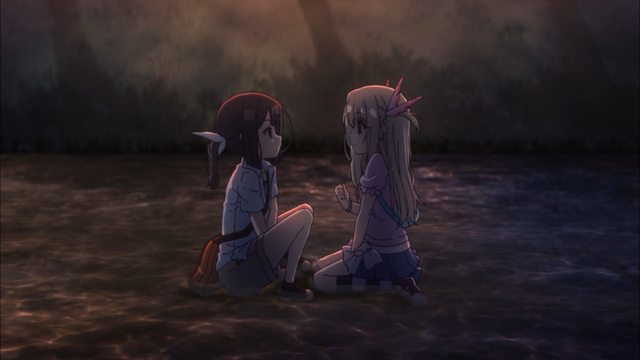 Also, it’s not what I watch Prisma Illya for (or any of these shows I guess) but I really want them to just kiss. It’s kind of driving me crazy.

But they bait it so hard, dawg! I’m not even invested and I’m frustrated. 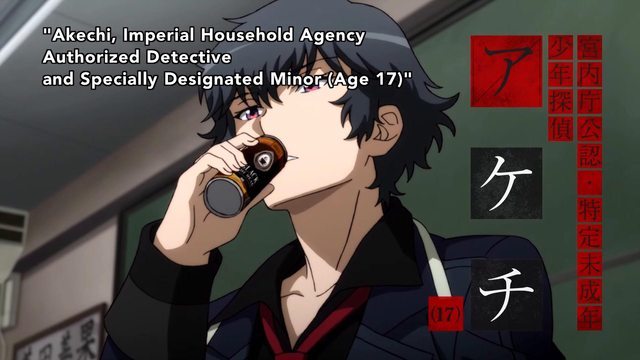 Ranpo Kitan: Game of Laplace seems alright. It’ll scratch that mystery itch, don’t know yet if it’ll leave you fully satisfied. Not sure why the first two episodes had to be about turning women into furniture and the 3rd about turning little girls into walls. You have to wonder what’s next if they’re gonna keep escalating this.

So we just wrapped up the first season of F/SN UBW last night. Goddam it’s a lot better watching this show the second time around. They give you so much as to the big end twist, but you still never see it coming!!! And there’s no dub available so my gf has to watch subs. SWEET SWEET SUBS.

Kirei I missed your true voice so much. Don’t ever leave me again.

The added scenes in the Battle of Gods mini-arc are great. I loved the scene where Vegeta senses that Beerus is going to blow a fuse, so he dives under the ocean to catch a giant fucking octopus, then blows off one of its tentacles using an energy beam. He proceeds to cook it on a nearby stove while he’s wearing a cloth wrapped around his forehead and an apron, acting frantically while preparing it. That was the highlight of the episode. It ended with Beerus getting into a fight with Buu for not sharing his delicious pudding. Buu was inflicting a flurry of punches at him, but to no effect. Beerus grabbed him by his head tail, threw him towards the ocean, and blasted him with an energy beam. If they keep it up with these added scenes to both movie mini-arcs, then I’ll no longer mind that they were included in the tv series.

Doug has befriended Worick, Nic, and Alex, so it seems like he’ll be fighting alongside the Handymen.

Really intriguing episode. It elaborated on Ushio’s background, and foreshadowed what was to come for him when he finds out who his mom really is, and what she’s been up to. Ushio’s father, Shigure, had a meeting with a shadowy council of elderly men and one elderly woman in the middle, who I can only assume is the leader of the council. Shigure serves them as a monk who contains or destroys evil spirits.

I liked the fight between Shigure and Tora, and then the men from the council joined in on the fight once it was made apparant that Shigure wasn’t going to destroy Tora, after all. These men, like Shigure, are also monks. Also a cool extension of that fight scene. After the fight was over, Ushio and Tora set off on a journey to find his mom. Shigure said that he wasn’t going to like what he discovered. This informs me that the series has turned dark, and for now at least, it’s no longer a monster of the week show. I hope it stays that way.

The Heroic Legend of Arslan 19

Nice. This episode was dedicated to Hermes and his battle against Bodin and his Temple Knights at Zabul Castle. He was instructed to go to the castle with a sizable army and eliminate them. I think Hermes isn’t exactly an evil person, but his desire for revenge against Andragoras III for Andragoras III killing his father has darkened his heart.

Actually, I don’t think he’s wrong for wanting to kill Andragoras III. Andragoras III is the brother of Hermes’ father, Osiris, who was the previous king of Pars. Brother killing brother for ambition is an especially terrible circumstance of murder. Where Hermes’ intentions fall apart are that he also wants to kill Arslan, who did nothing wrong. He wasn’t even born when Andragoras III killed Osiris. This is where Hermes began to show his darkened heart, and unfortunately, he inadvertently has turned into the same monster that Andragoras III was. Two wrongs don’t make a right, Prince Hermes. Hopefully Arslan can teach him that, as wise and selfless as he is, despite his young age.

Near the end of the episode, Arslan signed a document of proclamation that he urges all Parsians to join together and pursue and destroy the Lusitanian invaders. The other proclamation is that if he becomes the next king of Pars, he will abolish slavery, and prohibit buying and selling slaves. That sets up the gears in motion for a battle between Pars rebels and the Lusitanian army. It’s going to be interesting to see how Hermes plays into that, since publicly, he’s known as the enigmatic Silver Mask, military adviser of the Lusitanian army. Secretly, he’s plotting to reclaim the Parsian throne as king.

Wow. Such chaos near the end. I was speechless. It got gory really quick. I liked the vocal ambient BGM that was playing during this scene. Lenka and his crew encountered a new type of Aragami. This one had an aura of darkness radiating from it, and was tremendously powerful. Basically, the team got wiped out. The episode ended with a cliffhanger, but then it closed with yet another flashback of the scientists. This time it explained the first moment when the scientists were told about the existence of the Aragami. Before civilization was destroyed by their rampage.

You thought it was me, Orihara Izaya! 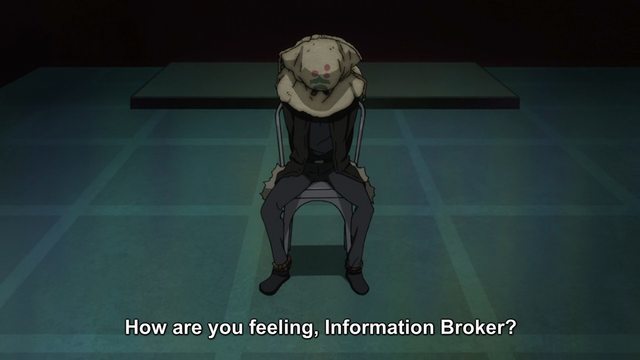 But it was me, Orihara Izaya!

i want it brehs
i need it

It was. That doesn’t count as a shirt.

I think they added new scenes when Vegeta was fighting Beerus. Good fight. Goku appeared at the end of episode 8, so now the Super Saiyan God part can begin, and then Goku will fight Beerus. I can see the Battle of Gods stretching out for three more episodes.

Episode 8 was a prelude to the chaos that happened in episode 9. Man, badass episode. It was an all-out war in the night club named Bastard. Roger and Erica are scary, especially the former. He’s a sadistic little shit, and all his teeth are sharp. Creepy. I’m not sure what Erica’s background is, but she’s twins with this other character. While her eyes are the same color, her twin has different colored eyes, and I think her brother might be a boss of a crime family. I’m not sure. They were being vague about that. I’m sure they’ll introduce him properly soon enough.

It’s gone back to monster of the week. Damn. Well whatever, they were interesting, self-contained stories.

I thought Gieve was being thrown under the bus at first, but they pulled a fast one on me. It was a rouse in order to raise troop morale.

Sort of a boring episode. Lenka and Alisa decided to work together in trying to make it out alive while being surrounded by aragami. They revealed why Alisa knew about that rare, very strong aragami. Cue flashback of her parents getting murdered by the same fucking aragami. This thing has it in for her bloodline.