The trailer for the new patch with lord of verminion is confusing. What are these small things?

They’re non-combat pets you can summon to hang out with you. There’s one of Iceheart where she takes the pose she makes when she transforms into Shiva but it doesn’t work and she looks all confused. It’s actually pretty cute. There’s also a Nanamo minion (if you’ll recall, the lalafell sultana I mentioned a long ass time ago) and if you idle long enough, she actually climbs up your character and rests on your shoulder. There’s many more minions but too many to really talk about honestly. If I can think of any other cool interactions that are too neat not to share I’ll post them, but there’s so many it’s hard to know where to start.

Sharing FFXIV with my kids

One of the things I appreciate about FFXIV is that, like LOTRO, it’s a game that I feel comfortable showing to my little ones. It’s slower paced and has a lot of visual treats for wide …

For you, the day I graced your party was the most important day of your life, but for me? It was Tuesday. 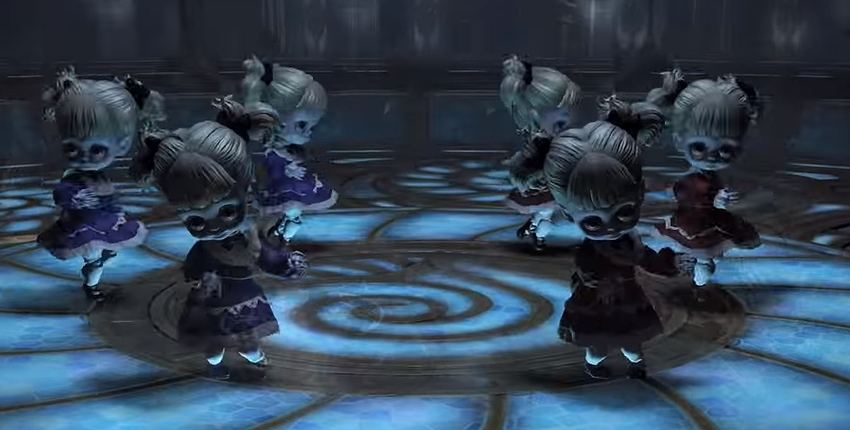 The Calcabrina reveal was the best part of the new patch trailer.

In other news, I found a lost Lalafell. 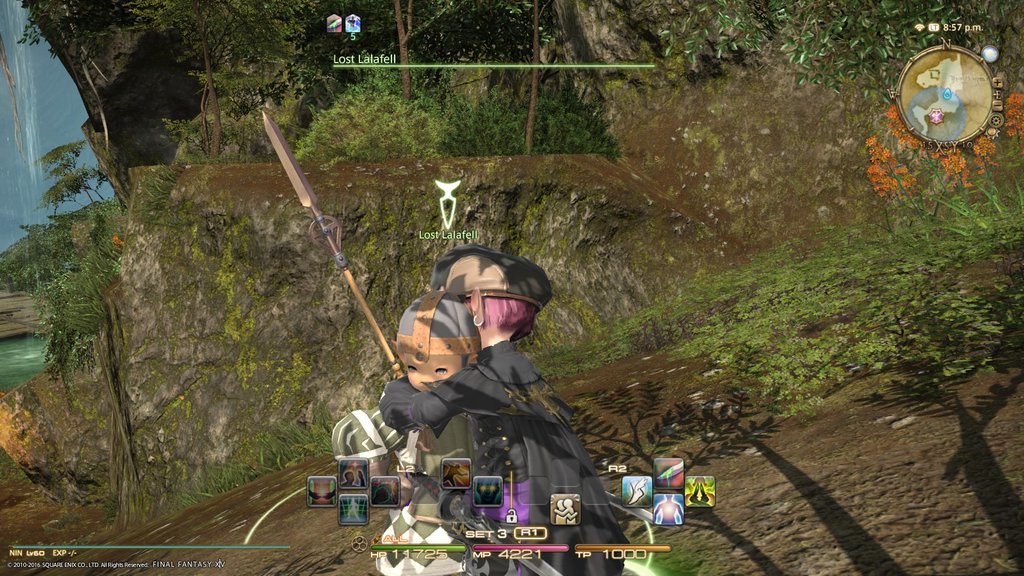 Why you always have cute pics :3 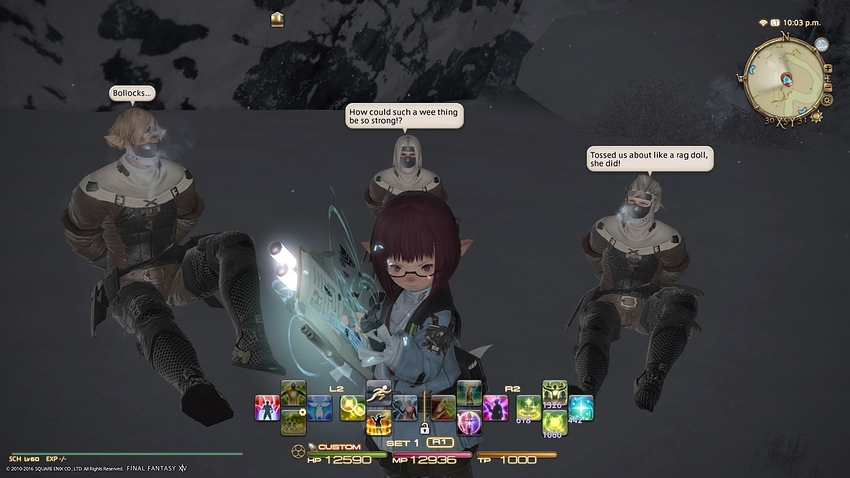 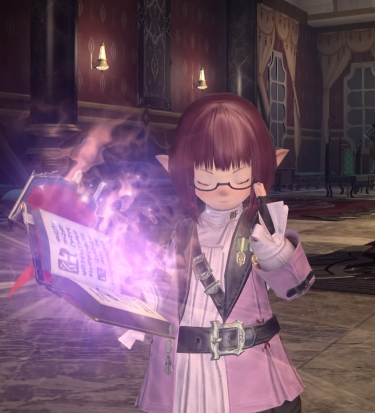 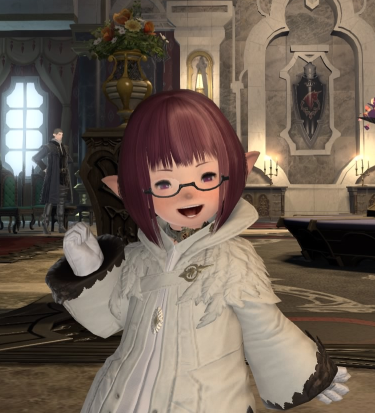 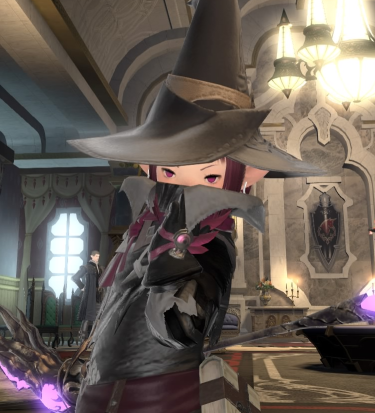 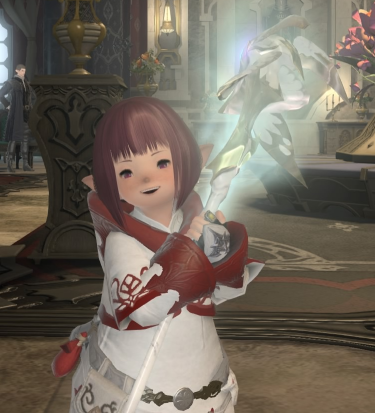 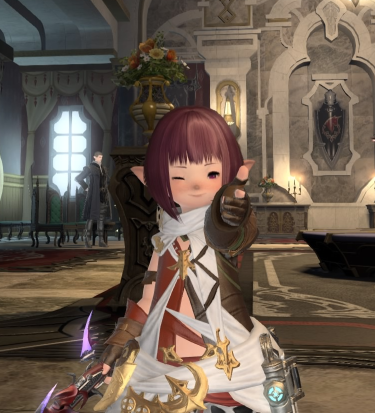 They added new emotes in the latest patch, these are my favorites. 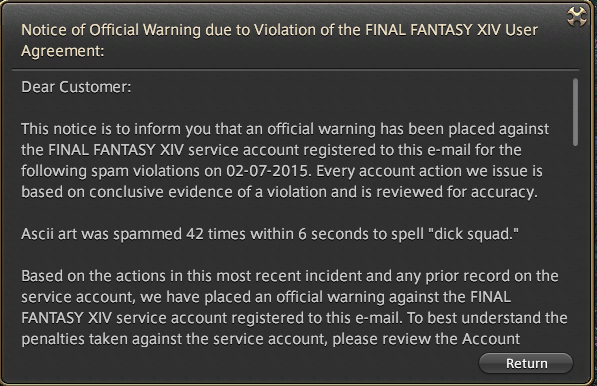 So this boss just came out this week and I beat it so I figured I’d share the fight right now. 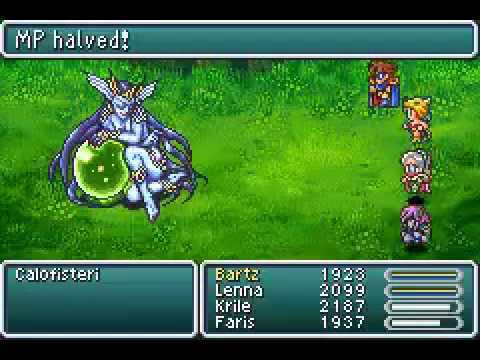 Calofisteri will swipe an entire side of the room in a half-moon shape from the side the sickle is sticking out of her hair. It does roughly the equivalent to 80-90% damage to every player hit by it and inflicting a very strong bleed debuff. The bleed is strong enough to kill in a couple of seconds so if you get hit you will very likely die. During the fight she’ll also trap people in a large bulb that needs to be killed before everyone inside it dies.

@ 2:40 She starts charging up and releases a bunch of green orbs. They need to be killed or we all die to her limit break @ 3:38. Noticing a pattern? I think she’s trying to kill us.

After this phase, she start perioding placing bulbs around the arena. The ones that have an axe-shaped end swipe in a 360° area around it, but the space directly under it is safe. The more bulb-looking bulbs don’t have any safe spaces near it, however its attacks never hit an axe-shaped bulb so you can generally just ignore them by standing under an axe-shaped bulb.

@ 7:15 she swipes every player except for the single tank. Nearly everyone dies and I have to use my Limit Break to resurrect my party. It’s bad times, I thought we would wipe from this but we managed to survive somehow. I’ll take some credit for that, I must be a pretty good healer.

@ 7: 51 sometimes she spawns all bulb-shaped bulbs though, the safest place is the farthest you can be away from the nearest bulb.

@ 8:29 the 3rd and final type of bulb is sickle-shaped, it shoots barbs in a line directly in front of it. The way to dodge it just note where they are and don’t stand in the path of any of them. 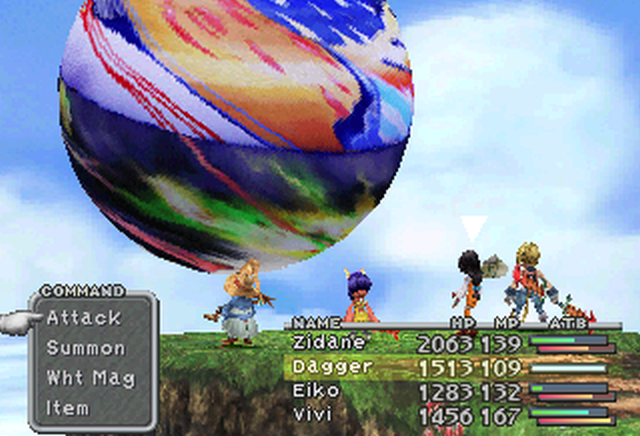 You can totally fall of the platforms in this fight. That was actually the very first thing I did.

@John During the fight, Ozma takes 3 major forms, starting with:

Sphere form - During the very first Sphere form, Meteor is cast on only one player from each group. The player that’s affected has to move away from the group so that Meteor impacts nearby instead of on top of the whole group. After that, Ozma casts Meteor on one extra player. The damage gets pretty severe at that stage. Also on the first Sphere form, Ozma also summons three cube-shaped minions that need to be killed before they inflict a lot of damage on the party. The next time, Ozma will start summoning six instead. This is probably the deadliest form.

Pyramid form - At the beginning of this form Ozma blasts the rectangular platforms BECAUSE FUCK RECTANGLES. To avoid it, you need to move to either side on the circular part of the platforms. During this phase Ozma casts Acceleration, which will cause a lot of damage to your party if you try to move.

Cube form - This time at the beginning of this form, Ozma blasts the outside circular platforms so everyone moves in closer. Ozma will also shoot each parties’ tank with a laser and orbs will rotate around the circular platform that damage you while you touch them. You have to be close to Ozma while being mindful that you aren’t getting shot by the laser too.

@ 1:40 Ozma begins casting Black Hole and teleports you to another dimension. It sounds peaceful here but it’s absolutely fucking not. If you take too long to clear this part, everyone dies! Each party has a demon to defeat before we can progress, but it requires people to stand on a pad to make another parties’ demon vulnerable to damage. After that you meet up with all the other parties to fight Ozma again, using Assimilation to encase people in stone if you look at it and casting more Meteors. Once Ozma is defeated here, you can return to the floating platforms where it is stuck in stasis and you have a little bit of time to attack it while it’s defenseless.

That’s a great boss fight. I like the music.

Not related to FFXIV, but I have to link this in here. I wish these guys would come back from the dead and make an FFXIV rap song, but I doubt this classic could be replicated. 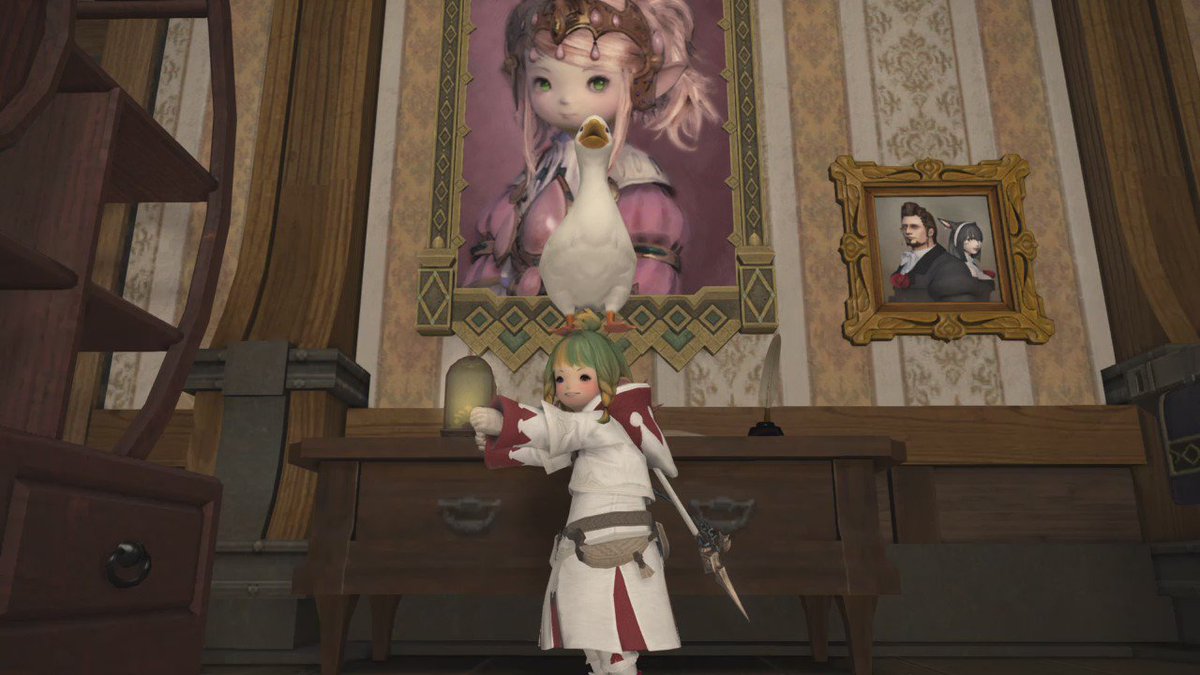 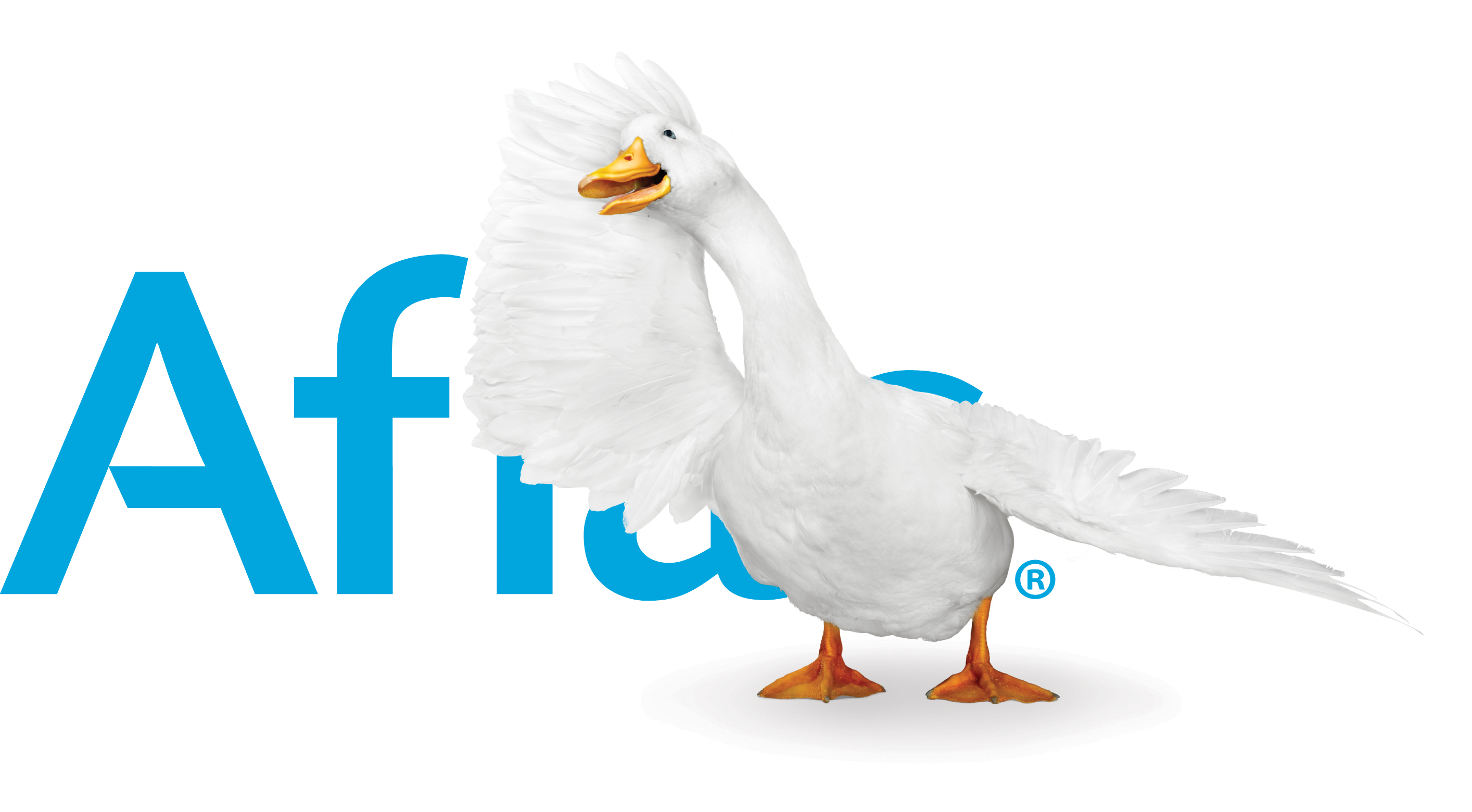 How did the Aflac duck get into FFXIV?