UK will leave the EU after referendum vote; Cameron resigns, elections in October

If it were going to NHS there’d be no need to qualify it.

Excellent op-ed in the LA Times by Brian Klaas and Marcel Dirsus.

This is the glaring contradiction in the muscular nationalism of right-wing populism, blended with isolationism, that seeks to withdraw from international unions: It cannot shape a better world by shutting the world out. The same people who cheer when Trump laments the decline of American leadership want to ignore key global issues and put “America First.” The people who voted for Brexit, attempting to create a border between Britain and challenges such as the refugee crisis, seem to think Britain can solve such problems without consulting Germany or France or, worst of all to them, Brussels.

The world doesn’t work that way, and it hasn’t for decades. Ever-increasing globalization has created an unprecedented surge in prosperity, but it has also ushered in jarring changes. The rough edges of those changes can only be overcome with more aggressive cooperation and engagement, not less. Whether it’s the risks of terrorism, the tragic flow of refugees, or economic shocks, Britain cannot solve problems alone and neither can the United States.

I honestly think this is what its all about: I don’t think Joe the Plumber had any say in globalization, I don’t think he wanted it, and I don’t think it helps him. If Joe had some way to tap globalization, if he could somehow see the benefit, he might be all for it; instead, losses are socialized and profits are privatized, and the structure is such that he can’t participate in the global economy in any way.

Globalization is a capitalist profit center wrapped in liberal social ideals. Joe the plumber will NEVER benefit from cultural pluralism - not because it’s a bad thing, but because it has almost no impact on his microculture, his neighborhood. This doesn’t make Joe a bad guy, and it doesn’t make him narrow minded, it just makes him pragmatic.

Globalism and the EU is a great idea in matters of defense and economic prosperity - but in order to make it digestible they’ve falsely wrapped it in kumbaya-style multiculturalism.

I’m not getting into it but suffice it to say that I think nearly everything RpgN has said up their is wrong and/or remarkably selfish.

I’m not getting into it but suffice it to say that I think nearly everything RpgN has said up their is wrong and/or remarkably selfish.

Selfish maybe, but wrong it isn’t. If you have nothing to contribute then don’t try to sound high and mighty about it.

I think it is fair to say that everyone deserves their own opinions.

Objectively it seems like this move is a net negative for everyone and to pretend it is anything else is objectively wrong.

@RpgN I feel that you saying it will be better for the UK to leave is very naive and assumes that the EU would give the UK the same or better deal than they have now. Which would mean the rest of the EU members would have an objectively worse deal while being in the EU. Why would the EU give the UK a sweet deal after the UK decided to leave the EU? That would only encourage the other members to leave the EU and that seems counter to what the EU wants.

The question remains if the EU will play nice with the UK and have minimal sanctions, or actively punish the UK for leaving. If looking only at imports/exports the UK imports more than it exports. However you look at it, things will cost more to import since existing trade agreements will essentially become invalid or need to be modified. If the EU sanctions imports from EU countries to the UK it could have drastic effects on the availability of goods and necessities which will further drive up prices. Compounded with the fact that if imports are sanctioned, exports likely would be as well so companies currently now in the UK will move away so that they can continue their global operations, which means less labor and less money for people to spend.

There seems to be no measurable benefit to leaving the EU other than pride. We all know how well pride does when making decisions affecting countries and the world.

I am an American, I don’t care much about the EU and the UK, but I realize that this will affect me and almost everyone in one way or another. I’m afraid of the long term consequences to this change. I feel sorry for those in the UK that voted to stay and were out voted by what seems to be a largely uncaring populace. I fear America would make similar mistakes if we were in a similar position.

@RpgN it might be good to avoid your own bias against the EU when discussing things, I don’t know anyone who thinks dissolving the EU is an objectively good thing. 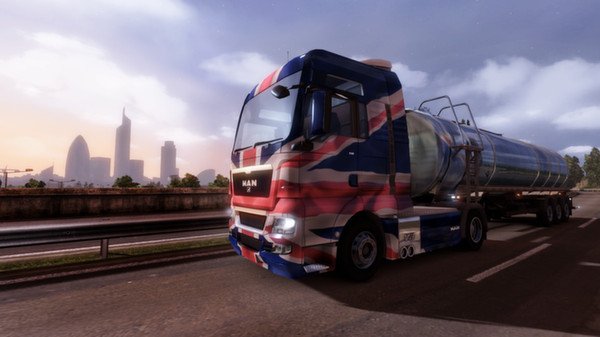 Congrats, nativist agitators. You get the thinnest cover to shit on immigrants and brown people you seek… and the dissolution of the UK you weren’t.

I was more asking what the NHS was. I know now. 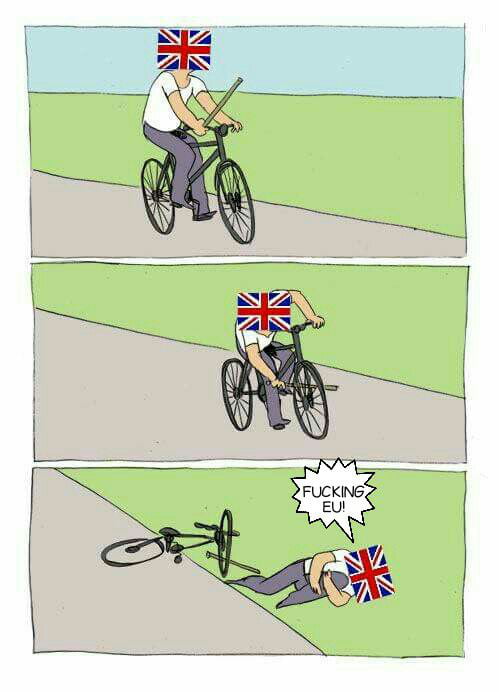 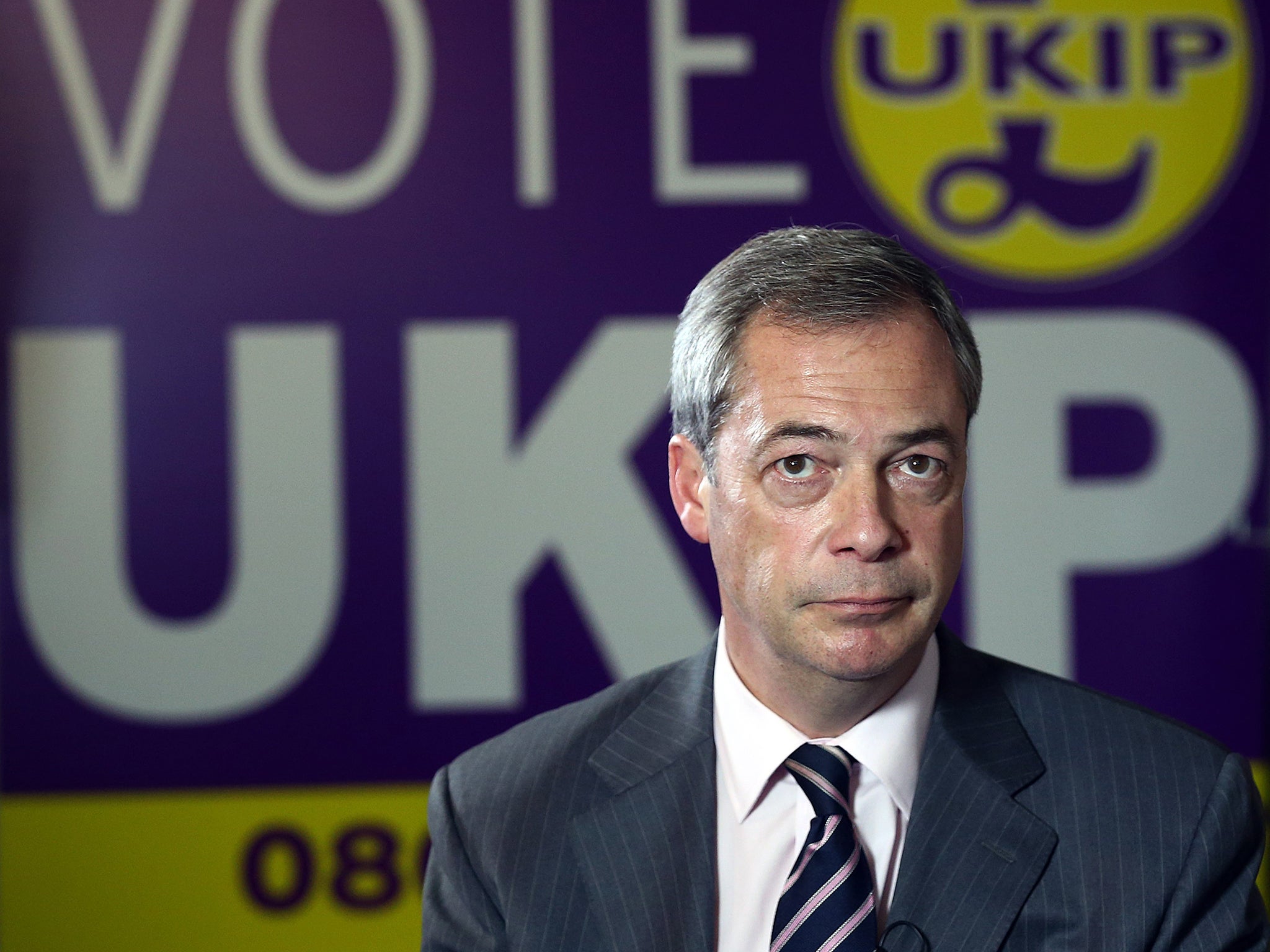 Farage: NHS might have to be replaced by private health insurance

Nigel Farage has suggested that the NHS might have to be replaced by a system of private health insurance within 10 years. The Ukip leader was forced to back down and declare his party’s support for a state-funded health service last November after a...

What a twist. The UK is turning into how America handled health insurance for decades (or perhaps since the idea of health insurance originated), and America is slowly progressing towards universal healthcare/single payer. The roles are being reversed, and it’s what happens when far-right conservatism controls the government.

“The world is enjoying a populist moment. Like all such moments, there is a mob quality to the Brexiteers, Trumpistas and others, but their sentiments rest on real complaints. If national leaders are committed to addressing the real problems that lie beneath the populism — a growing underclass, tides of refugees, and anger at government (not necessarily in that order) — then Brexit will be a wake-up call.”

All speculation, of course. Nobody knows what will happen, but I agree with the above; people are tired of their governments and are lashing out. 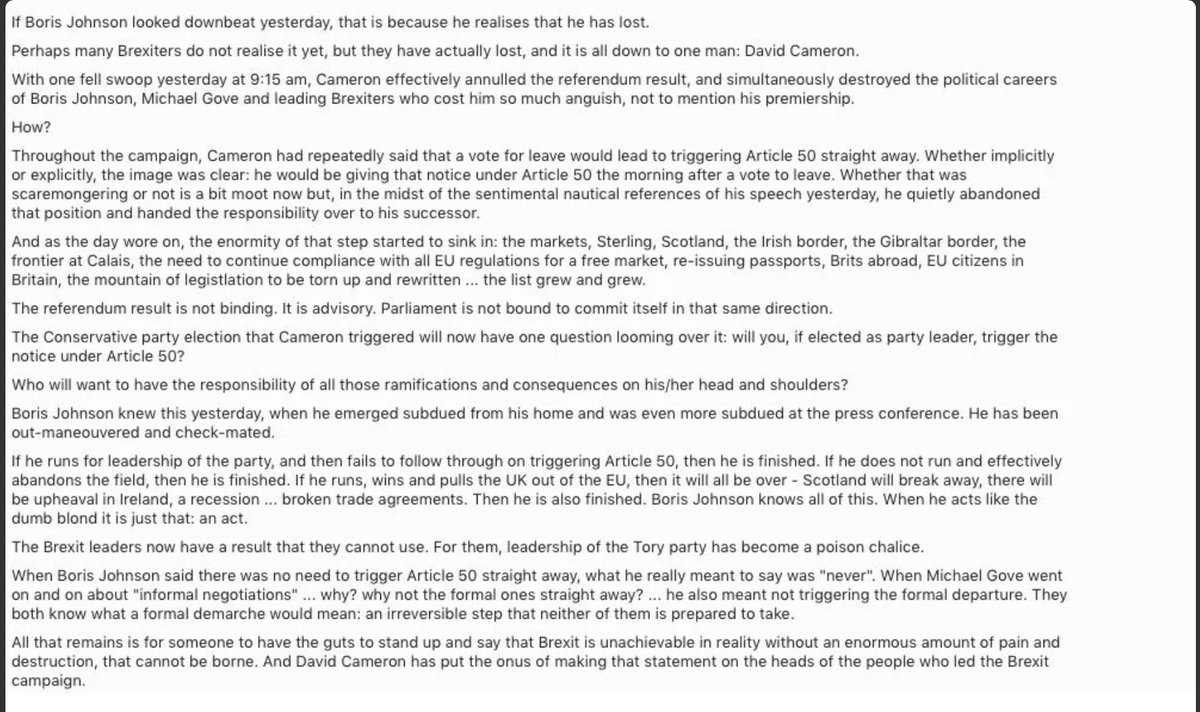 You come at the pig fucker, you best not miss.

I figured out what the BR in brexit really stands for: Buyers Remorse.