Criminal proceedings against the President of FIFA

Bern, 25.09.2015 - The Office of the Attorney General of Switzerland (OAG) has opened criminal proceedings against the President of Fédération Internationale de Football Association (FIFA) on suspicion of criminal mismanagement as well as – alternatively – on suspicion of misappropriation.

On the one hand, the OAG suspects that on 12 September 2005 Mr. Joseph Blatter has signed a contract with the Caribbean Football Union (with Jack Warner as the President at this time); this contract was unfavorable for FIFA. On the other hand, there is as suspicion that, in the implementation of this agreement, Joseph Blatter also violated his fiduciary duties and acted against the interest of FIFA and/or FIFA Marketing & TV AG.

Additionally, Mr. Joseph Blatter is suspected of a disloyal payment of CHF 2 Mio. to Michel Platini, President of Union of European Football Associations (UEFA), at the expense of FIFA, which was allegedly made for work performed between January 1999 and June 2002 ; this payment was executed in February 2011.

On 25 September 2015, representatives of the OAG interrogated the defendant Joseph Blatter following a meeting of the FIFA Executive Committee. At the same time, Michel Platini was heard as a person asked to provide information (Article 178 of the Swiss Code of Criminal Procedure). Furthermore, the OAG conducted on 25 September 2015 a house search at FIFA Headquarters with the support of the Federal Criminal Police. The office of the FIFA President has been searched and data seized.

As for all defendants, the presumption of innocence applies for Mr. Joseph Blatter.

This is all great.

[quote]FIFA president Sepp Blatter has been provisionally suspended by the organisation’s ethics committee, a close friend has told Sky News.

Klaus Stoehlker, who has advised Blatter in the past, says the committee made the ruling pending further investigations by the Swiss attorney general.

He described it as a “pending” verdict, and said no negative finding had been made against the head of world football’s governing body.

The announcement comes just hours after Blatter criticised the criminal investigation against him in Switzerland, describing it as “outrageous”.

He also defended his decision to remain as head of the football organising body and not step down immediately, as worldwide sponsors have urged.

Sky News’ sports correspondent Paul Kelso says the 90-day suspension is the longest FIFA’s ethics committee can hand down while they carry out their investigation.[/quote]

Sky News - First for Breaking News, video, headlines, analysis and top stories from business, politics, entertainment and more in the UK and worldwide.

The US Department of Justice indicts 16 officials - hours after two Fifa vice-presidents were arrested in Zurich.

The current and former senior football executives charged are

On Thursday, it was announced that one of those defendants - former Concacaf president Jeffrey Webb, has pleaded guilty to money laundering, wire fraud and racketeering and has agreed to forfeit $6.7m (£4.4m). He did not contest his extradition to the US.

A really good docu for anyone remotely interested in the shenanigans that have been going on at FIFA. 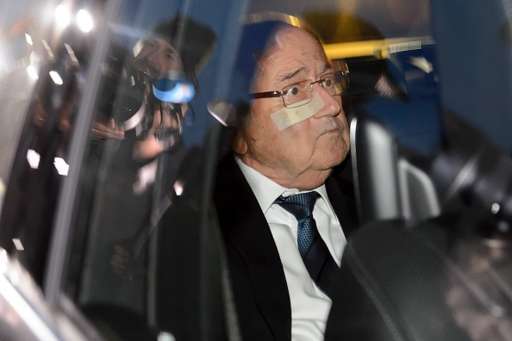 I’m happy but they’re just heads of the hydra

His speech is absolutely brilliant. It’s everything I ever hoped for. I’m so glad they’re both banned. Absolute parasites. Now to get the rest of them to fuck off and reform the whole thing.

Totally not something a dictator would say. He lied in English, German, French and Spanish.