You can wear anything you want in a cutscene.

Now it makes sense, thanks!

You’ll OD on likes. Don’t go down that path.

Dug up an old video of me healing a low level dungeon. Watch out for 2:10, It’s very unusual for a healer to use the limit break, generally it’s up to the DPS. What that means is the situation was very dire. The archer nearly dies at one point, getting as low as 3% HP.

All of this could have been avoided if they destroyed the pods circling the room. Up until that day, I didn’t know what would happen if you ignored them. It turns out they explode and cover the floor with poison.

That looked stressful as FUCK. I should attempt healing one of these days just to find out if I can handle it. What I want to know is do you use the d-pad to toggle through your party members to heal?

I’ve made progress in the story in Heavensward. For one, I can use a flying mount in the Coerthas Western Highlands. It’s SO MUCH BETTER in traversing the clearly intentional terrain design of very high mountains. Before you have a flying mount, they force you to go out of your way to reach a higher ground by taking a long path around. In other words, they want you to work towards getting that flying mount ASAP. This was the case in Coerthas Western Highlands. It isn’t an issue in the Dravanian Highlands. My dragoon is now level 53, soon 54. I also started the machinist quest line. Currently, in the story, I’m at Thok ast Thok. It’s a big challenge. Ravana wipes the floor with me (and others)! My first attempt, my party wiped, and all tanks and healers quit. Lame.

Yeah, I use the d-pad. With Scholar it especially sucks, at least Conjurers (pre-White Mage) get Medica, which is an AoE heal. Getting my level synced down to a 29 or lower level dungeon as a Scholar means I have none of my healing abilities except for Physick, which is just the base heal you get as an Arcanist (pre-Scholar). I can’t even cure ailments like poison, they lock that up until after 30 too. Conjurers get to have Esuna way earlier. 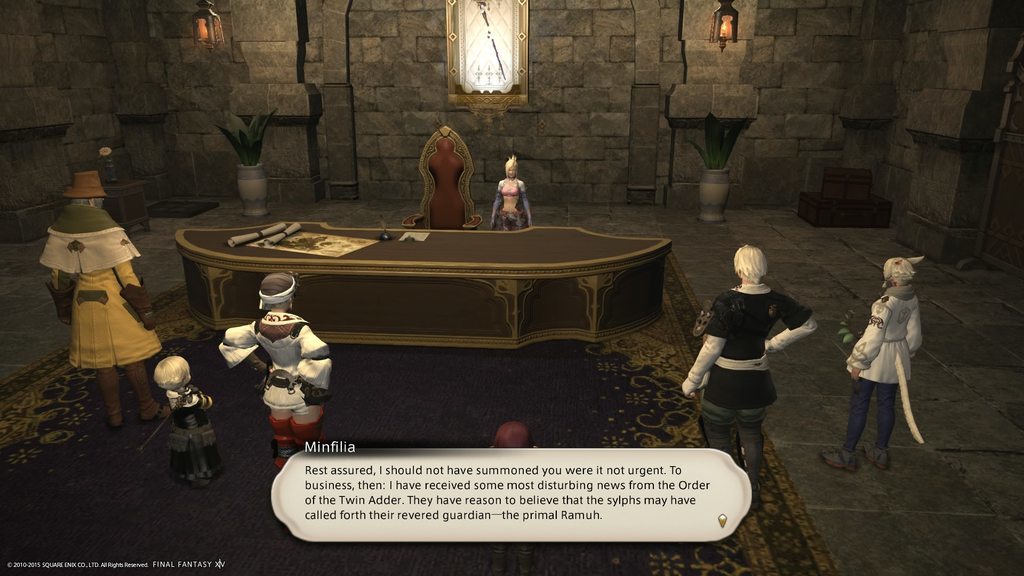 Primal extermination squad, assemble! Well, except this primal is more than a little different from the rest. Earlier in the game, around level 30, (maybe you got up to here, @John?) you investigate the Twelveswood in order to check on the Slyphs, make sure they’re not summoning a primal. Well they weren’t at the time, but you turn your back on 'em and look what happens. 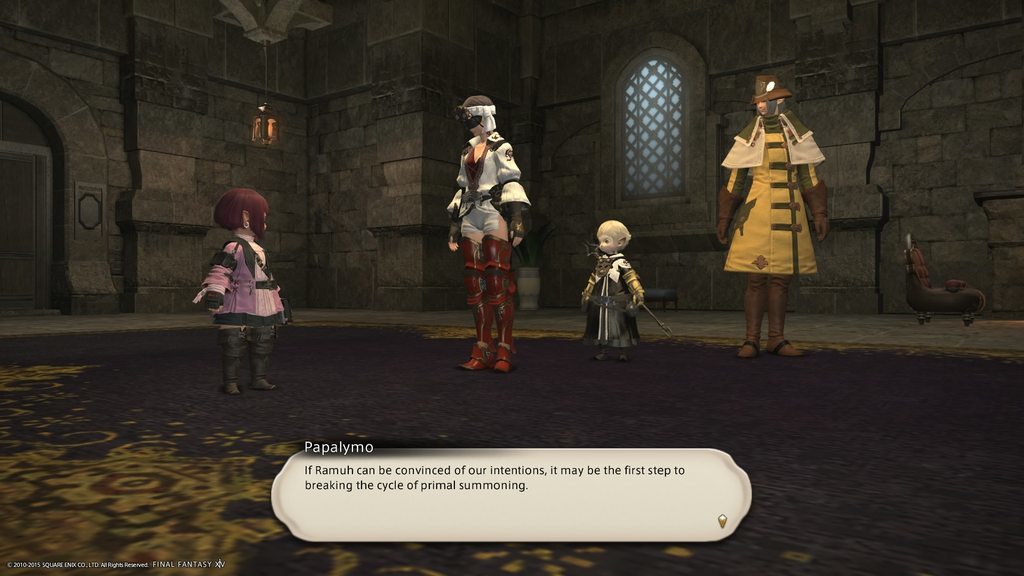 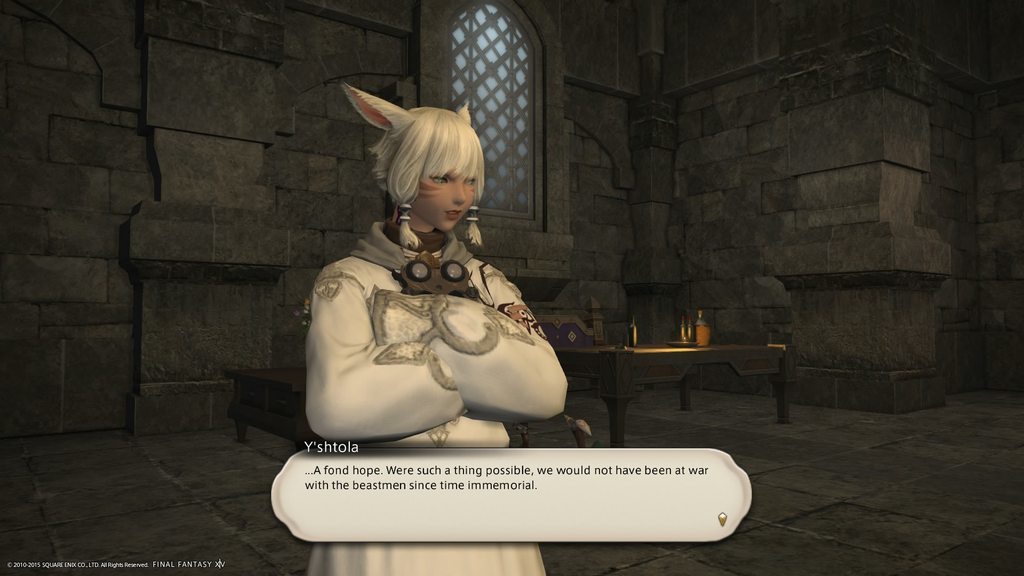 The Slyphs are one of the many beastmen tribes, which is a term for any humanoid beast. Every tribe has a God they worship, which they sometimes summon a facsimile of in the form of a primal. Usually this only happens when that tribe feels threatened. 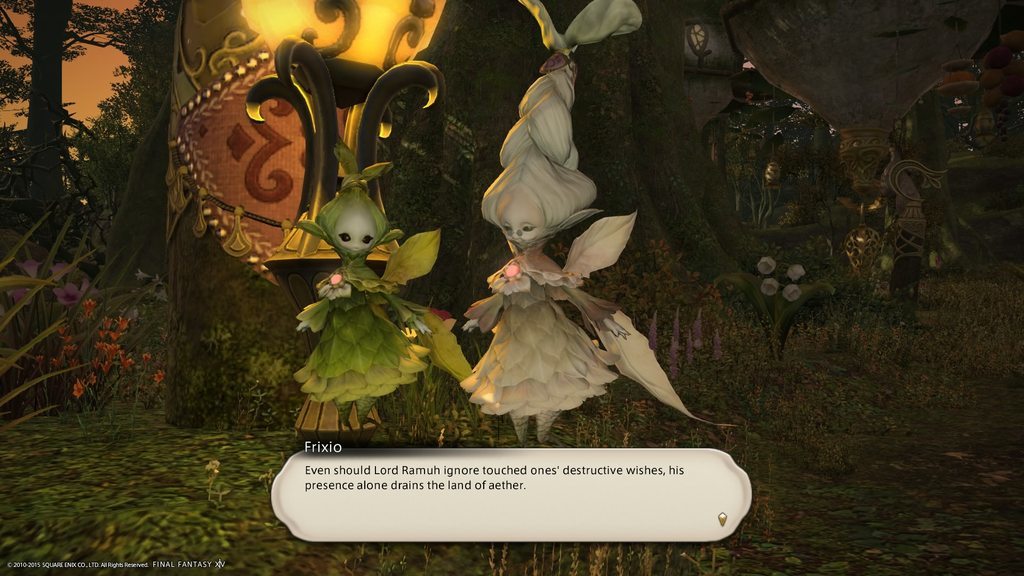 It is not in Ramuh’s nature to be aggressive, which isn’t to say his presence isn’t a threat. Similarly to the Good King Moggle Mog XII (may his rest never be broken) his summoning has a detrimental effect regardless of whether he actually does anything. When a primal enters the world, it passively saps aetheric energy from the world to maintain its form. It’s not an immediate problem but it’s kind of like a massive carbon emission in our world. It’s bad for our ozone layer and can’t be allowed to exist, which is essentially what a primal is in Eorzea. Despite all that, we set out to broker peace with him instead of fighting.

To be clear, just straight up talking to a primal like this is highly unusual. That he doesn’t attack you on sight is very heartening. Nevertheless, we end up having to fight him anyway. It would suck to be deprived from a boss battle so this is hardly a problem!

Ramuh’s theme is probably the most unique among all of the primals. It’s not the kind of music you’d imagine from a boss theme.

This is a bit of a long cutscene but it does a good job of explaining the nature of a primal and potentially what the Ascians (black-hooded bad guys) are. 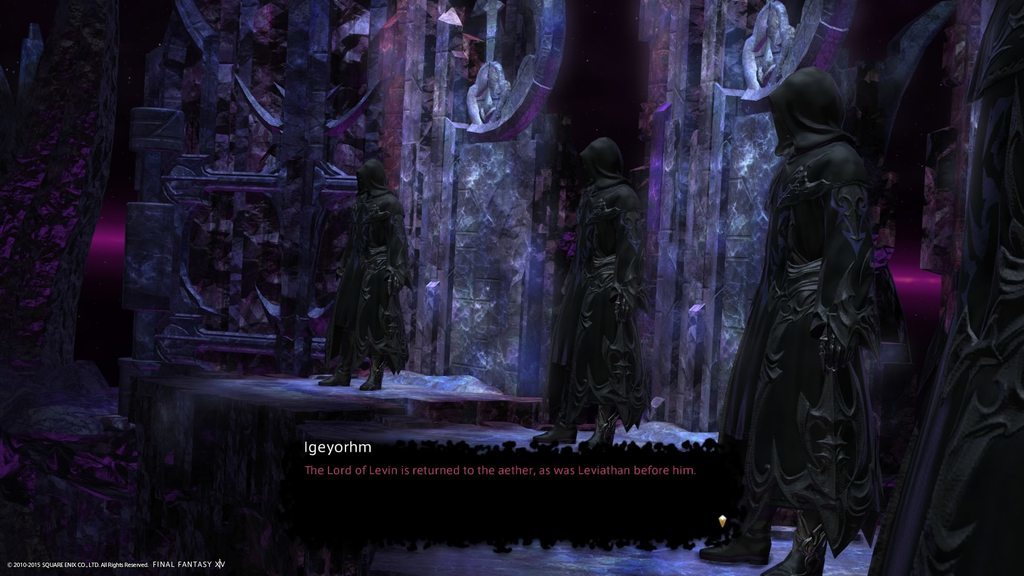 They are referring to Ramuh, who is sometimes called the Lord of Levin. Levin is an old word for lightning, which is Ramuh’s element. 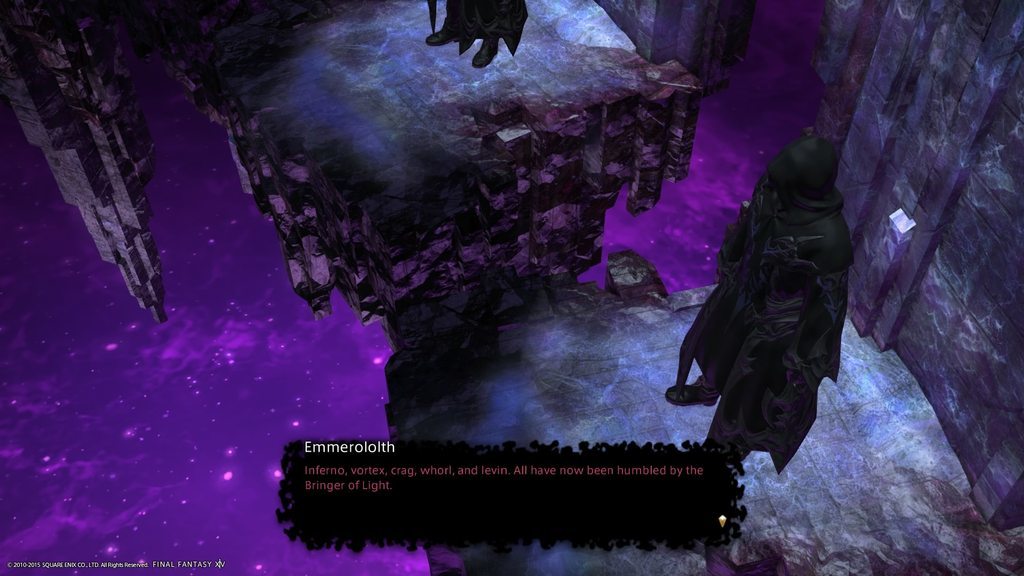 In order: Ifrit, Garuda, Titan, Leviathan, and Ramuh. They don’t count the Good King Moggle Mog XII (may his slumber ever be peaceful) ;_; 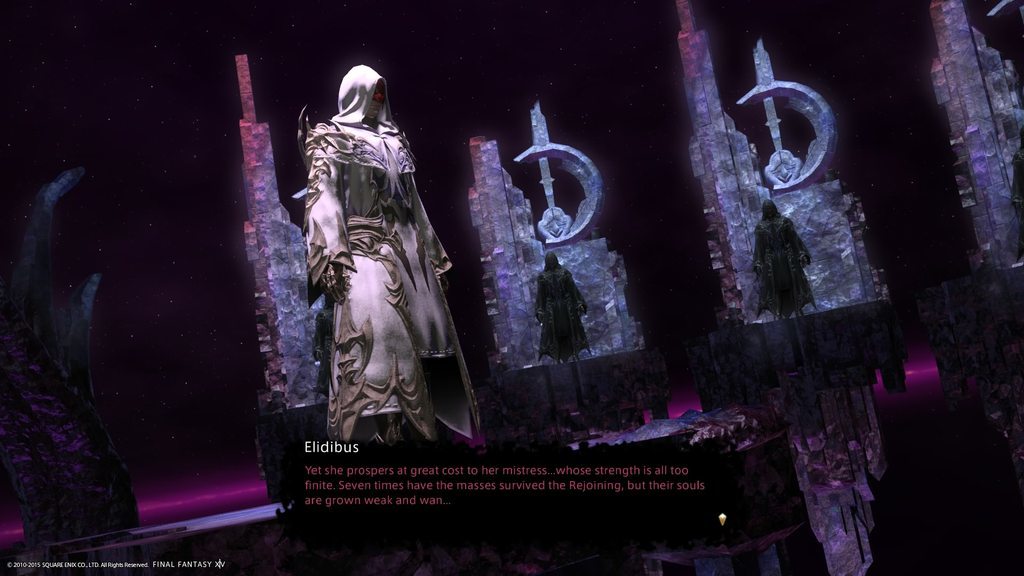 It’s probably worth noting at this point that Hydaelyn hasn’t spoken to the player ever since the ending of the main story.

Tataru Gaiden: Provider of the Realm 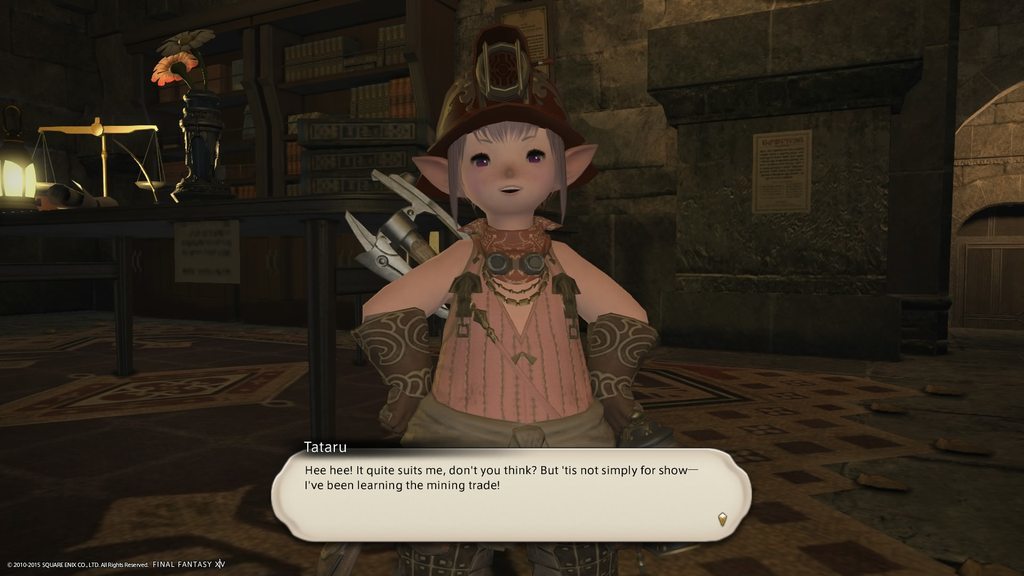 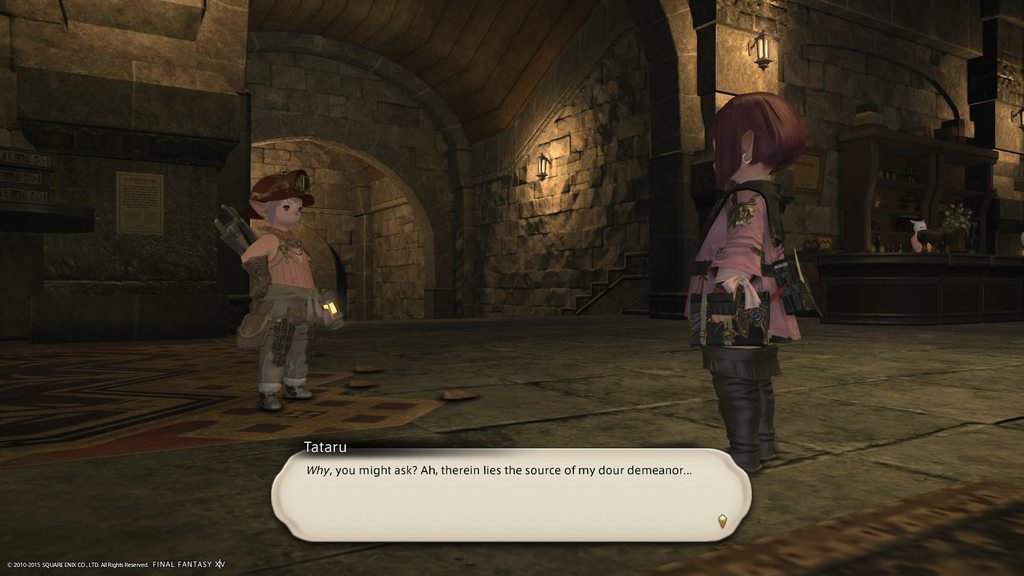 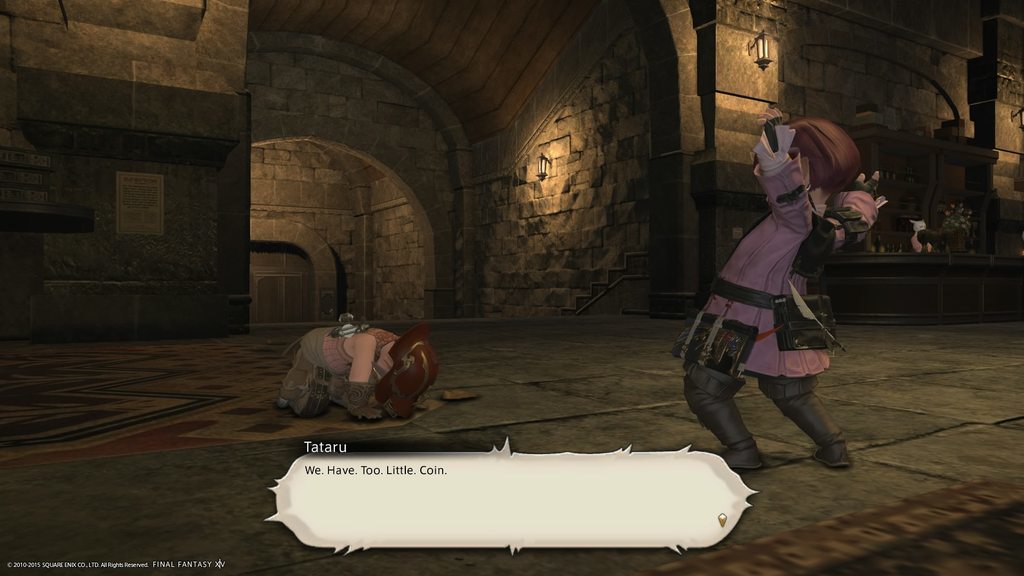 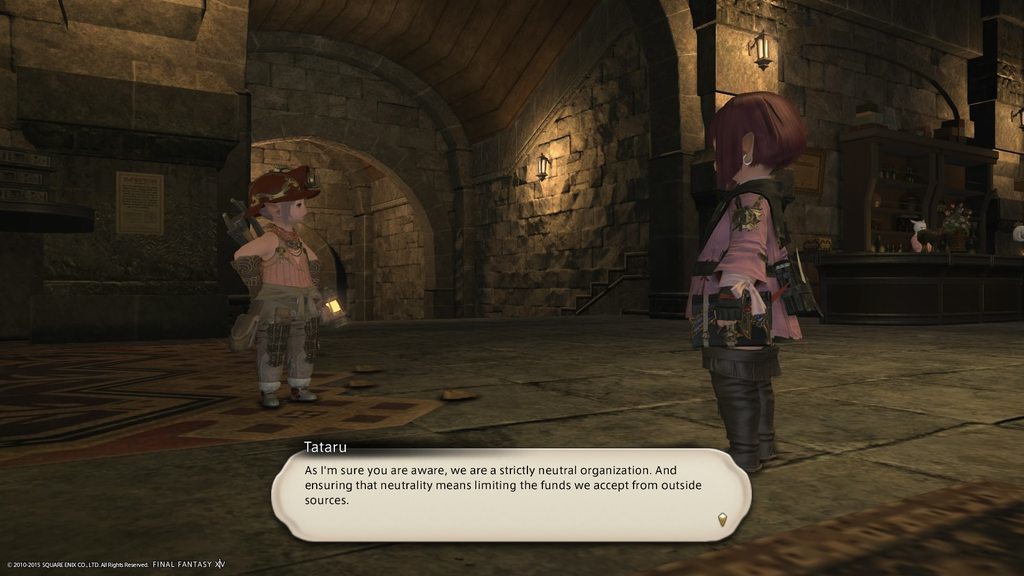 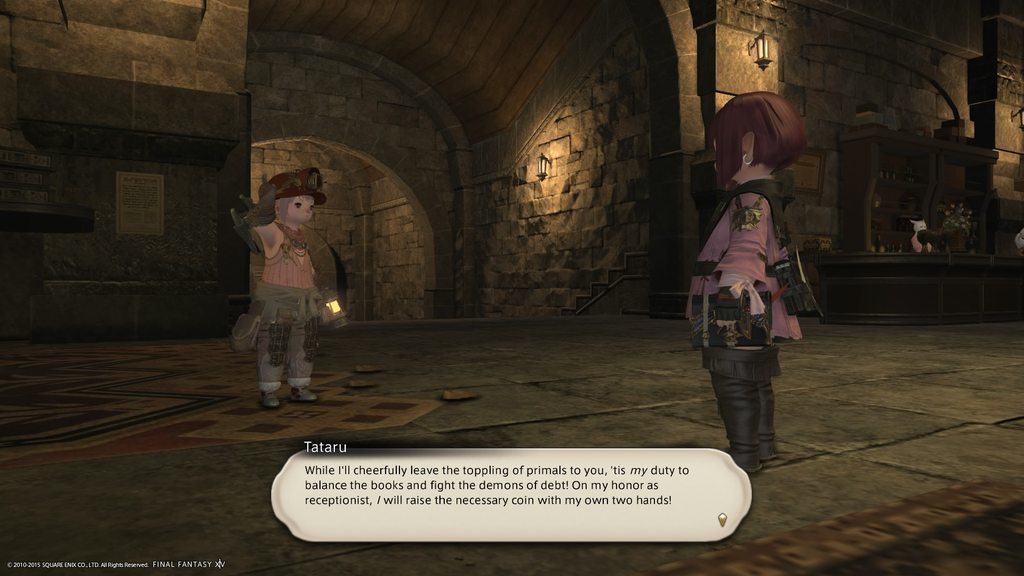 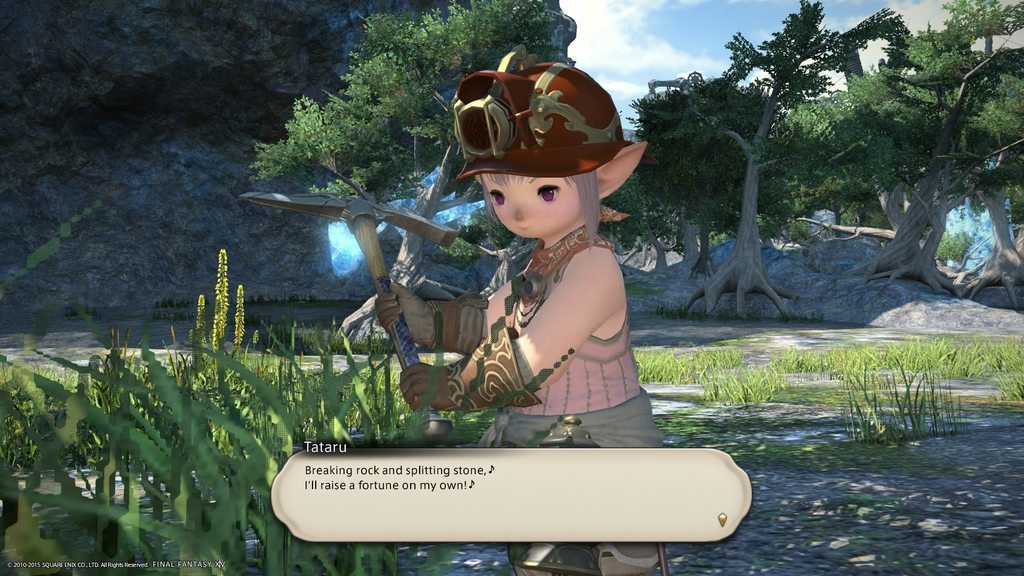 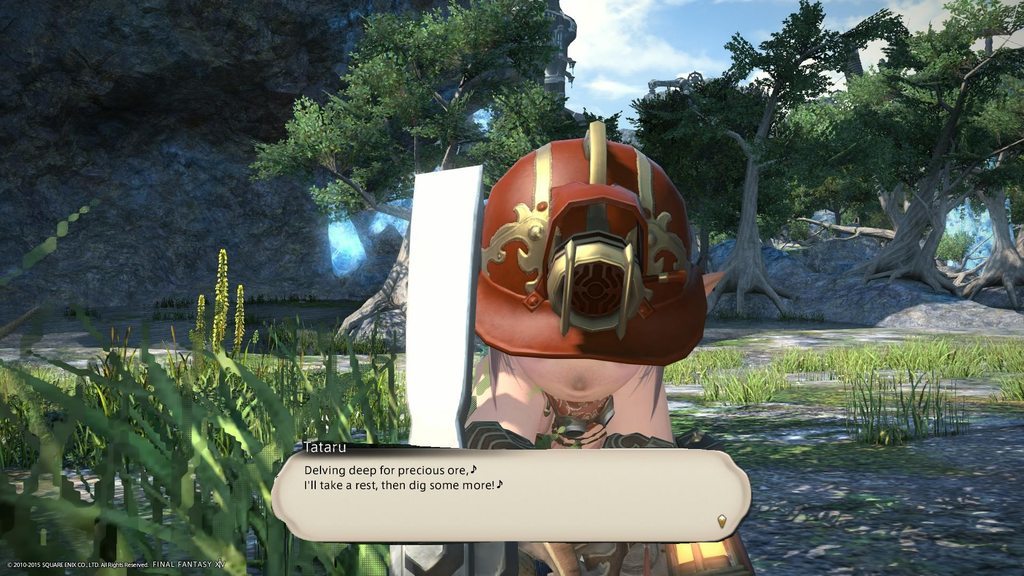 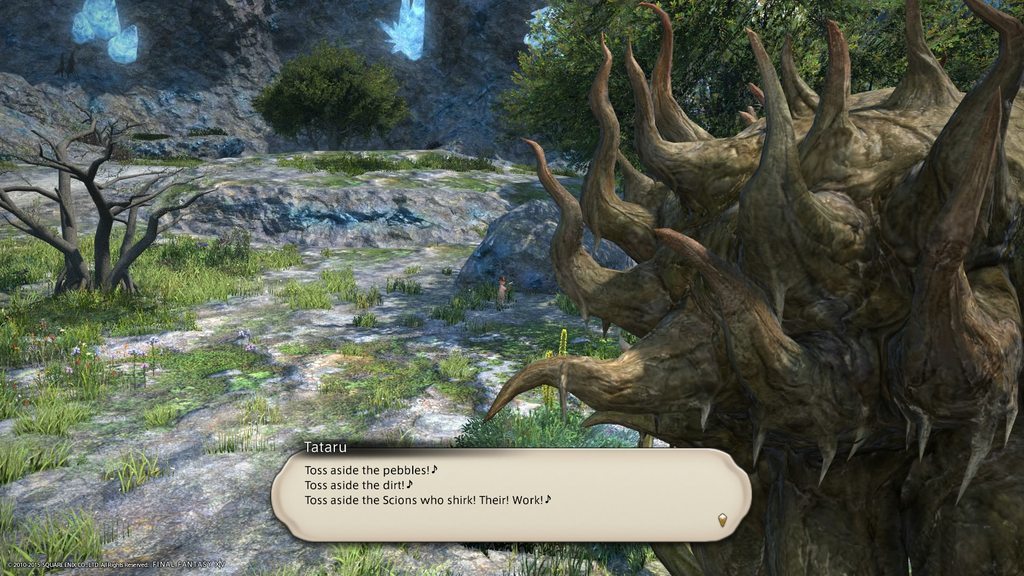 Tataru is TOO. DAMN. CUTE.

Blizzard Entertainment had the largest online player community in its history, with Q2 MAUs up 50% year-over-year. Though World of Warcraft® ended the quarter at 5.6 million subscribers, Blizzard revenues are up year-over-year based on strong performance across the expanding Blizzard portfolio. On June 23, 2015, Blizzard Entertainment released, Fury of Hellfire, one of the largest non-expansion content updates to date for World of Warcraft. This new content helped stabilize the subscriber number towards the end of the quarter. World of Warcraft remains the No. 1 subscription‐based MMORPG in the world.

WoW on the other hand…

Edit: hazards of unofficial data, WoW uses active subscribers, FFXIV dataset can only use all players.

This story bit and writing is different from the quest that involved the ninja. It feels as if it’s a different game. This time I am very impressed with the writing. Ramuh’s text was beautiful

The music, the themes and story…Sometimes this really does feel like a proper FF game. Ramuh’s theme sounds like an unsual last boss battle theme.

Thank you for taking the time to add all of these links, explain some of the names and terms.

The Ninja thing is more of a Ninja Gaiden. It has hooks from the main story but it’s not directly part of it. The main story has to be a proper FF story, class quests (which is what the Ninja thing is) are where the designers get to stretch their legs and do something different. The Dark Knight (new job in Heavensward) quest is A-MA-ZING and I can’t wait to get to it, but I have to get through some stuff from A Realm Reborn first.

I guess what I’m saying is please look forward to it.

To be Lalafell is to have power over time itself.

How about some gifs?

Just some random stuff I happened upon.

I’m too late to comment…but that video is just :3 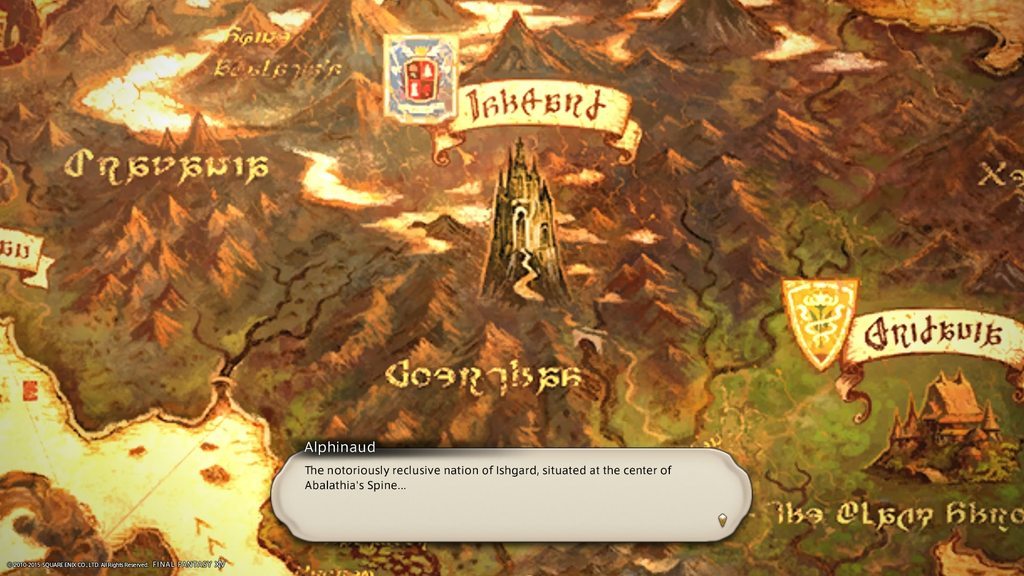 A fair amount of the story this patch occurs in Coerthas, a snowy region to the far north. Within Coerthas is the isolated nation Ishgard, which is the subject of the Heavensward expansion. This is essentially a bunch of build up to it.

I didn’t cover this before but Coerthas actually plays a small part of the Main Story Quest earlier in the game. I needed to track down Cid’s airship The Enterprise and the only way to do that was to go visit the Astrologians (fancy word for sky-watchers) of Coerthas and have a look at their sky-watching logs. Obviously it wasn’t that easy, you end getting mixed into their politics. You learn that Ishgard is at war with the Dravanians (A FANCY WORD FOR DRAGONS) and that witch-hunts for “heretics” are extremely common. A heretic is anyone found to be or suspected of having associated with dragons. Lord Haurchefant, of the house Fortemps, is accused of heresy when one of their shipments is intercepted and found to full of Dravanian parahinalia. Long story short, you help them clear their name and then they use their authority to get you the logs you need to find Cid’s airship. Politics.

One more thing, since being accused of heresy typically means your death, Lord Haurchefant treats you as a hero for saving his life. 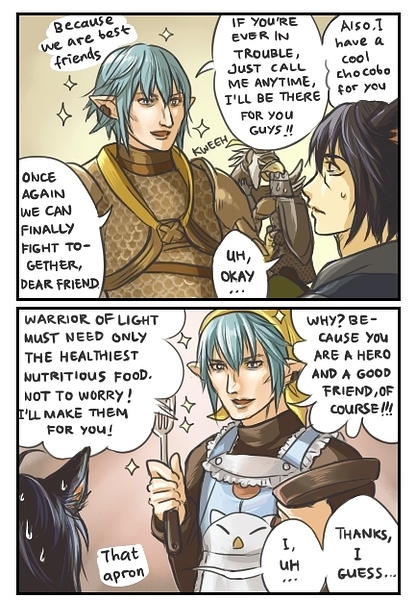 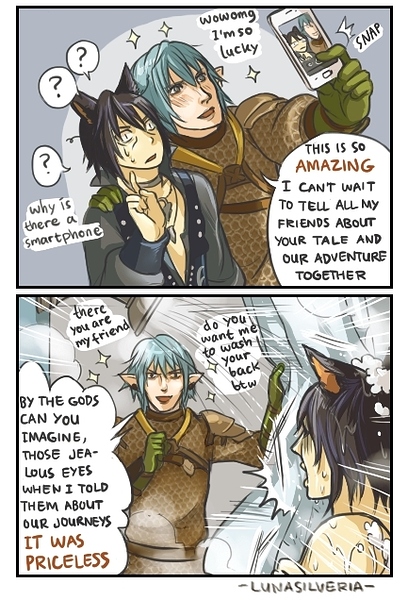 He’s always so excited to see you! He’s all like please visit me again! He’s also always super worried whenever you do something dangerous. He’s so precious. Also that moogle apron ( /)u(\ ) 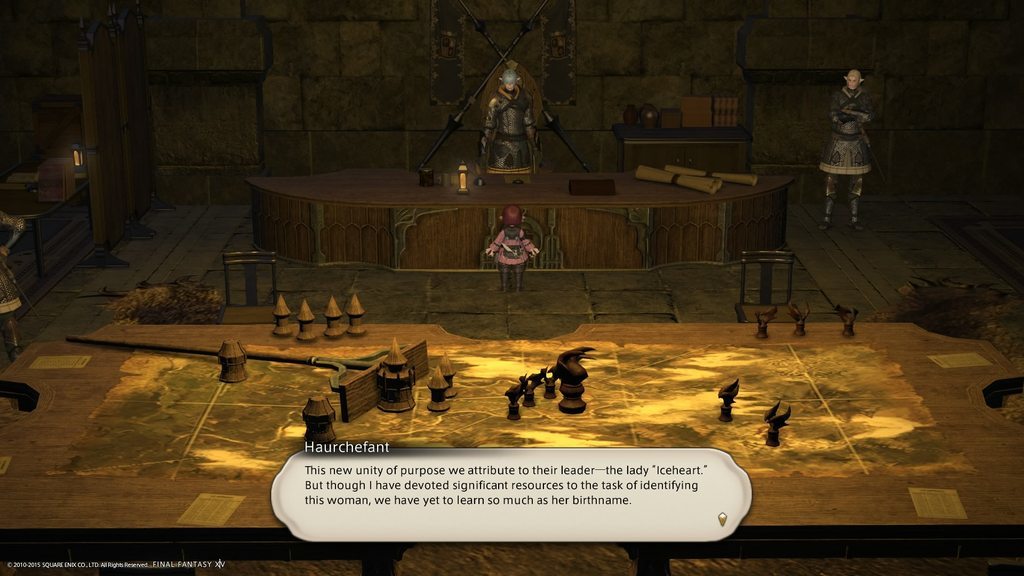 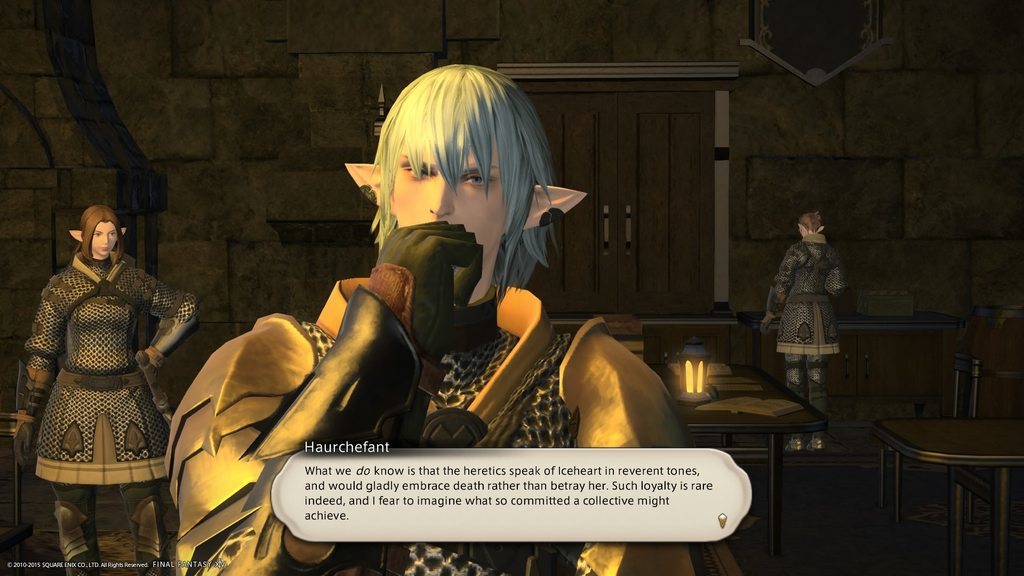 Heretics have been attacking vital supply shipments, leading you to go to Coerthas in order to investigate. Naturally you pay a visit to Lord Haurchefant to see if he’s heard anything. It turns out he does, and not only that but according to him it seems the heretics are far more organized than they used to be. Your investigation leads you to a wall of ice with a secret passage. Sounds like a dungeon to me! 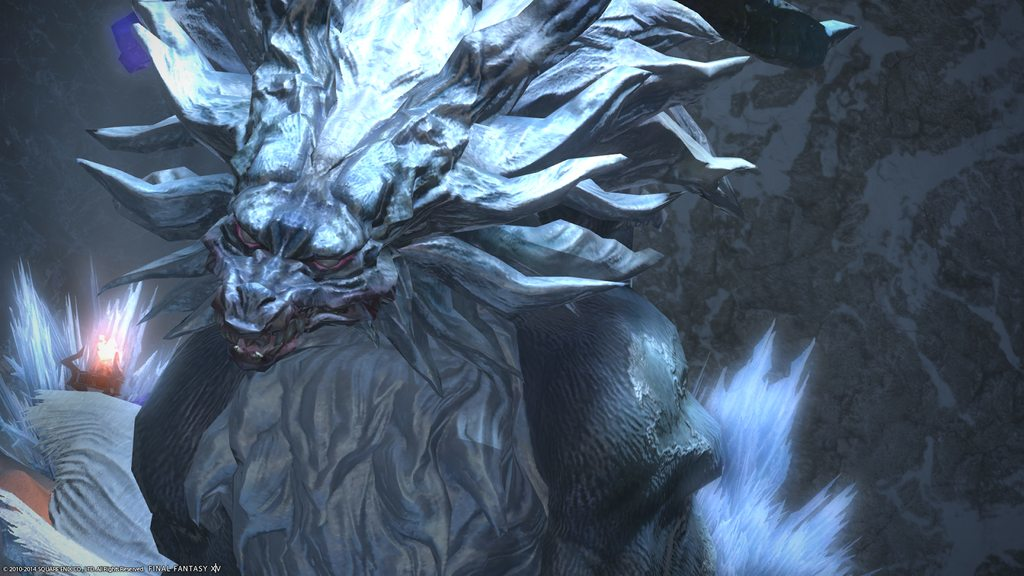 Like Ramuh, such an unexpected theme to hear. The last boss in Snowcloak is Fenrir. That’s one motherfucker of guard dog.

I guess you can see why she’s attracted so many followers. She’s gorgeous cold as ice devoted to an ideal with such zeal that it’s not surprising at all that she’d amass a following. Unfortunately she gets away before we can do anything about it.

This is another long cutscene but I felt it prudent to upload. Our research into finding a way to trap Ascian souls (if you’ll recall from the last long cutscene I posted) can also be utilized to help us catch Iceheart. It’s risky, but what’s new? 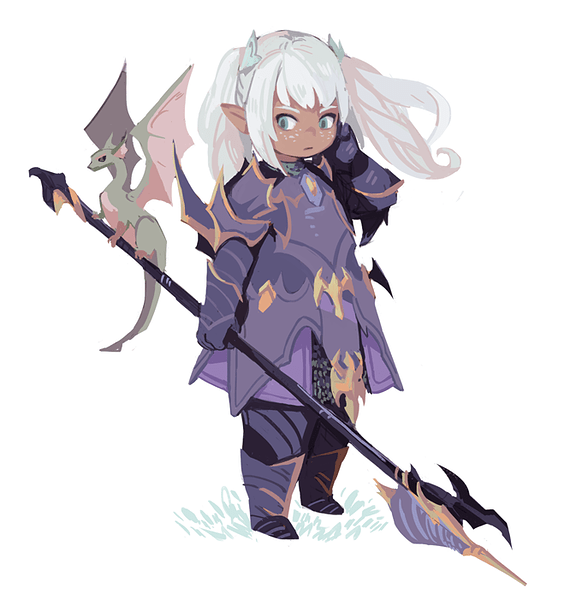 Also the Dragoon is a lalafell <3 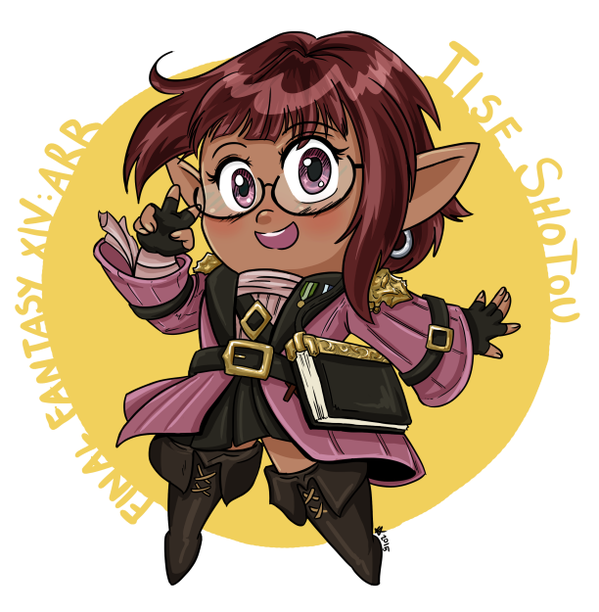 Artist is Cadistra, I won a contest and she drew my character.

Well, not quite, it has to be two fingers bunched together on each side.

I intended to make a whole post about Astrologians (it’s a new healing class in Heavensward) so I could explain what I’m doing here and I still will, but I’ll do it later. Titan hard mode isn’t a good fight to do it on anyway. I’m mostly posting this for @Leo so he can see how I dodge Titan’s mechanics, while healing. I go the whole fight basically untouched, though I can’t say the same for my party…

I actually used my full limit break around the 7 minute mark, and even that’s not enough to win. Game is hard. I did get 5 commends after we beat it on the next try, they know who carried them. 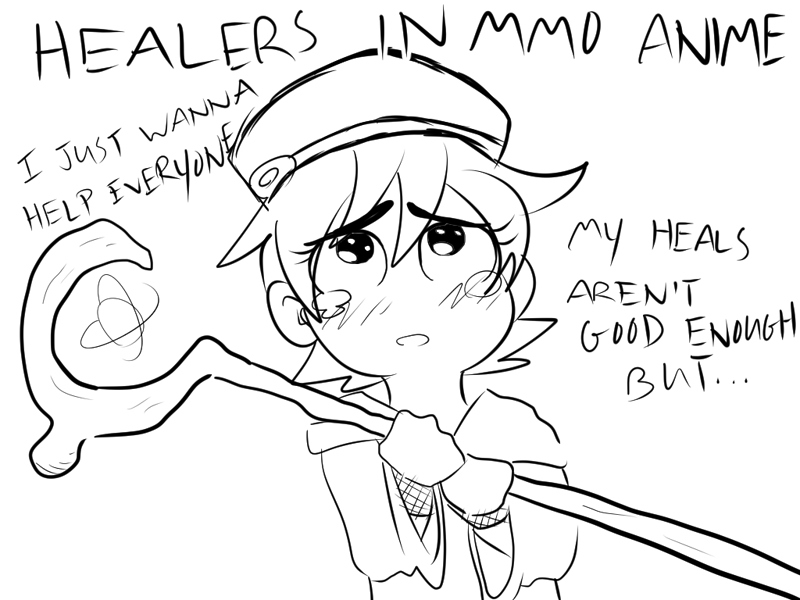 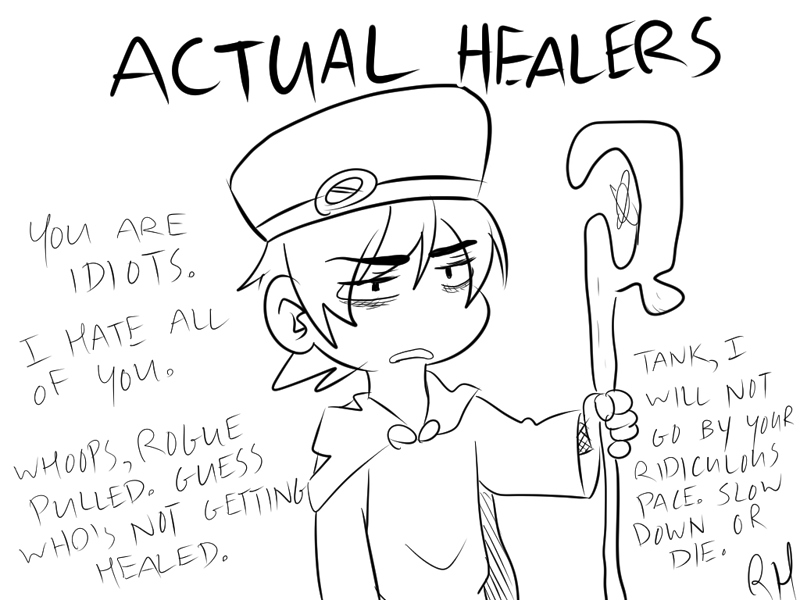