Listen, I had things to do. How often does someone complete a relic weapon in 2 days?

Now it’s a zenith weapon. I happened to have the materials on hand. It didn’t even take half an hour, kupo.

Well I do love my boobie physics

I saw that a couple days ago. Naoki Yoshida broke out in tears on stage when FFXIV ARR 2.0 launched. Him and his team went through a hell of a lot to salvage that mess which was the 1.0 build. Apparently, many other producers at Square Enix are nervous because of his work ethic and micro-management skills.

The things devs will do on their spare time.

Here it is, the final dungeon of the main story!

No final dungeon would be complete without an encounter with Lahabrea.

Even the Empire is but a pawn to the Ascians.

Even still, you can’t count them out. Gaius is a very persistent motherfucker, but the 3rd time will be the charm.

It wouldn’t be heroic if I killed the man, my ally, Lahabrea was possessing. It’s cheesy but I love it.

Of course it wouldn’t be a final level without a self-destructing base and escape sequence.

Oh, you mean the elder primal that caused the cataclysmic event that nearly ended the world? That Bahamut?

The main story is over, but the fight is just beginning.

I’m glad I just uploaded the video instead of making gifs. Every time I thought about posting this I would just balk at the time spent.

That dungeon is so long. Doing the duty roulette daily for it is boring, but gotta get that soldiery. With that said, I’m close to completing my Weathered Astrum armor set. I just have to get a Weathered necklace and Weathered bracelet. That would only leave me with a non-item level 100 ring. The other one I have equipped is the Weathered ring. I considered getting one of the other i100 rings that had stats not suited for a Dragoon. We’ll see. They only cost around 375 soldiery, so it’s not too bad.

Currently, my armor set are at item level 86. I’m making progress. I’ve been taking part in hunts pretty much daily, as well as doing my daily and weekly mark hunts. Since I’ve attained close to the allied seal cap of 4000, I’m going to buy a lot of Sands of Time so I can upgrade my Weathered Astrum armor set to item level 100.

The new Dragoon theme for Heavensward has been announced:

Soul of the Scholar

I decided to switch classes, now I’m playing as a Scholar which is a healing job. I started playing it for similar reasons to why I started playing Archer: I wanted to try something atypical of the genre. When Archers become Bards, they gain songs to buff your party or debuff the enemy. The current implementation feels a little lacking, you generally only use one song and it only lasts until you cancel it or your MP runs out. Unfortunately, a Bard’s MP and MP regen leaves something to be desired. So you activate it for maybe 30 seconds and have to wait like 2 minutes to use it again. So I started checking out some other classes, and I stuck with Arcanist long enough to hit max level. Thankfully you get 50% extra XP leveling any class lower level than your highest. One of the unique things about Arcanists in FFXIV is that they’re a pet class. They’re also the only class that has two potential Jobs: Summoner and Scholar. Summoner focuses on the offensive and defensive capabilties on your pets, harnessing and manipulating the essensce of the primals you fight like Ifrit, Titan, and Garuda. Scholar, on the other hand, does something completely different. You acquire fairies that will heal and support you and your party. That combined with Scholar’s primary role in preventing damage with barriers as opposed to straight healing really appeals to me. So far I’ve been sticking with it.

The quest line is pretty interesting too, in Eorzea, the ways of the Scholar is a lost art from the Nym civilization. You learn about their downfall as you progress, apparently everyone mutated into Tonberrys and went mad. It culminates in your saving this one particular Tonberry, and he teaches you the ultimate move Lustrate, which is a large instant heal. He also gives you the Scholar robes that the Nymians wore.

I got to attend a wedding in FFXIV a few days ago!

At 00:00 I was sent to a waiting room while the bride and the bride do whatever it is you do before getting up on that altar.

When the ceremony starts, they descend from the ceiling : o

The minister is a moogle, obviously.

The ring exchange is done with aetheric magic. It’s kind of too long, it took like 2 minutes.

I don’t know if they chose the manderville theme on purpose but I lamented in say chat how hard it was not to do the manderville. In my defense, one of the brides started it!

Weddings in MMOs are so nerdy.

It’s kind of the filler arc of the story, but it’s the best filler arc ever because you get to fight:

This is the first dungeon/raid after beating the main story. The Moogles wanted a primal so badly, they invented one. It’s the cutest thing ever. You beat up all the little moogles, who are all different jobs like White Mage or Paladin, until The Good King (May he rest in piece) descends from the sky and joins the fight.

As the Scions are primarily a primal extermination squad, as ever it falls to us to eliminate any that spawn. However this time we get to fail to stop one from being summoned! It reminds me of Naoto’s shadow where they’re like hey shouldn’t we stop this instead of watch it happen? Not that I’m upset or disappointed about either of those situations since I’d be deprived of a boss fight. Speaking of:

Leviathan is a primal that has retreated to his domain, the open sea. The plan? Get a large platform to fight Leviathan on and even larger ship to carry it out to him.

It’s a neat fight, he’s probably the biggest primal. He’s so big you fight his head and his tail. He also jumps over the platform and tries to knock it over. You can actually fall over and drown, anyone who does can’t be raised.

Good King Moggle Mog was a majestic experience. It felt more like I was taking part in a theatrical play than being in the thick of battle.

The Leviathan fight was cool. When I was getting swept back and forth on the ship, it was a bit disorienting.

As of right now, I’ve beaten Shiva recently, and the next major dungeon in the main story is Keeper of the Lake. I’m looking forward to fighting the final boss in that place because the music is beautiful.

Oh, and I swear one of these days I’ll take some pictures of my character and scenes I take part in. It’s just a little tedious transferring them over to my computer. I guess I can send them to my email via PS4. 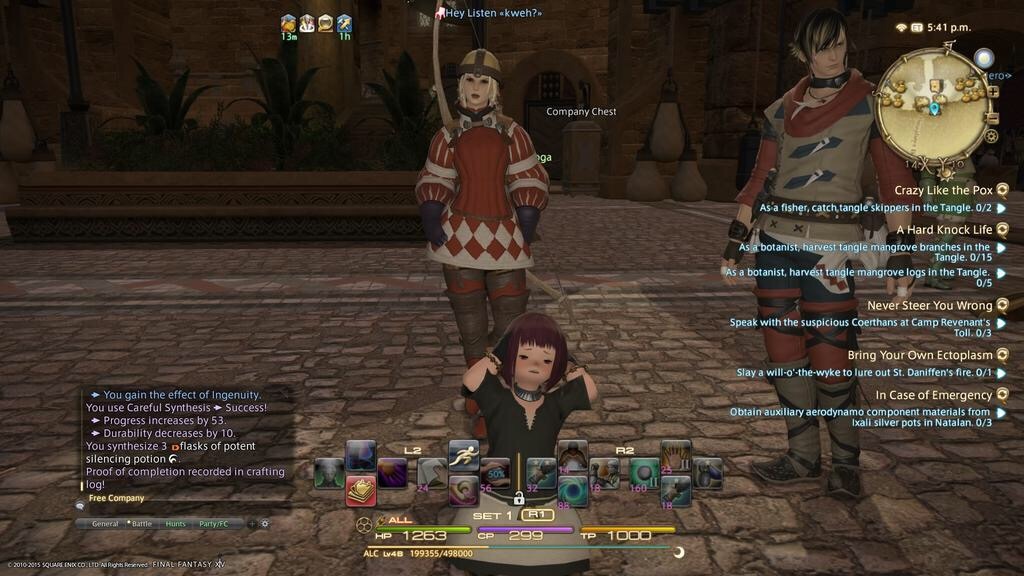 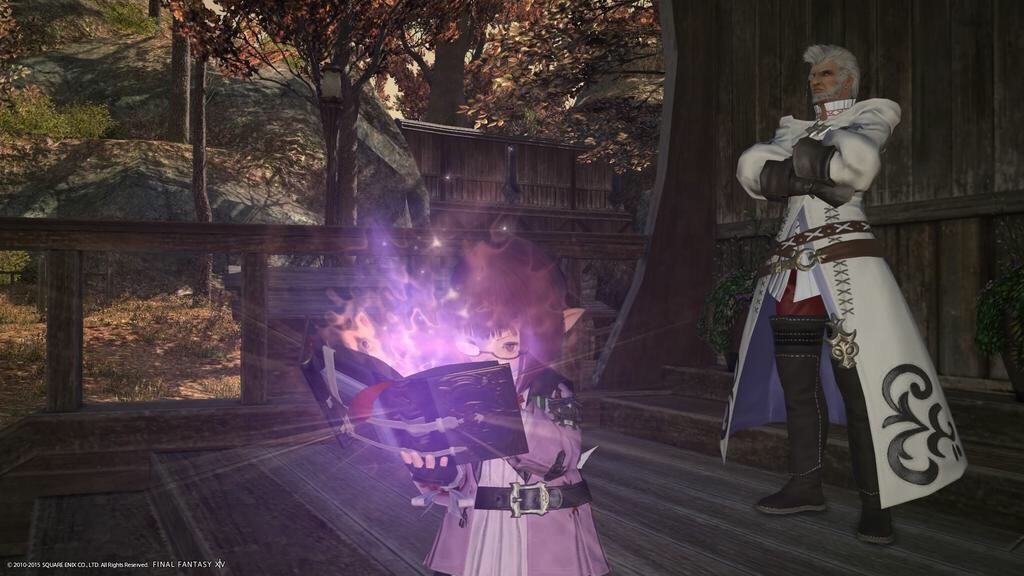 I upgraded my relic, the book is different and it has an ever brighter glow now.