I can see the comparison with FFXV…Either way though…it still looks amazing. It is what I hoped this remake would be. Being as different as possible to make it fresh, while still being recognizable as FFVII.

I don’t want to get hyped though. FFXV was a very different game before. The same might happen here.

my first reaction is already negative based solely on it being an ARPG not turn based
we knew that already though. my generation is a dying breed. its just a shame as ff7s materia system was great imo,
easily could have been sped up like ffx, improved on,etc.

but no we arpg now, despite being strategically deep as a puddle

graphically it looks great at least

barrett should take of those fucking sunglasses though

Are we sure that it’s a full on action game though? The were commands displayed. There might be more behind it.

Count me to the people who actually would like to have a full on turn based or active time battle system. It seems like besides a niche game on handhelds…we’re not going to get one on consoles again.

That being said, I can’t hold that against FFVII…yet. If this game really manages to deliver on everything else…then it’s going to be amazing regardless.

Also…I was thinking about those sunglasses. He never had it before with FFVII, right? 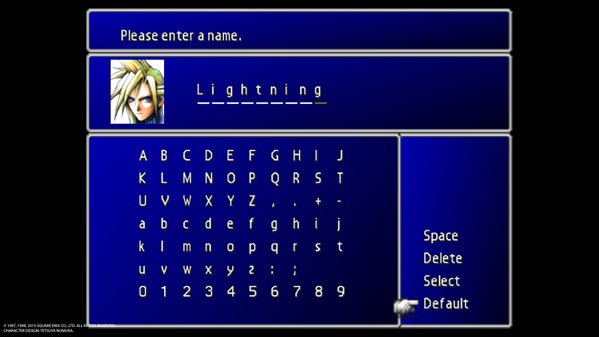 Wtf did I just see?

That was the biggest piece of shit I’ve ever laid my eyes on.

How do you fuck something up this badly?

Like, I’m not even a huge fan of FF7. Not a purist or some shit. This is just objectively worthless.

Apparently you are? That type of gamer when I read type of comment. 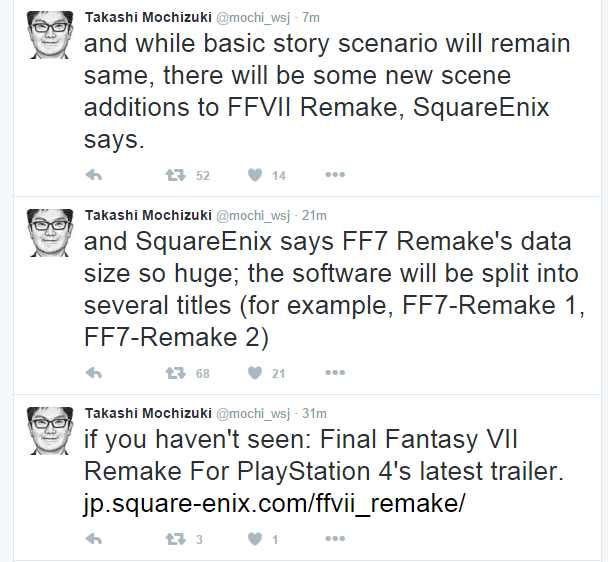 I hope they will have time to redo the combat system first. With all the betas for FF15 they seem willing to experiment and respond to player feedback.

I wouldn’t mind an episodic RPG, provided it is good. The FF13 sequels do not inspire confidence.

This made me more pessimistic. I can only imagine how shitty it can get…the game being cut into pieces…some content not being in the remakes or added as DLC, pre-order incentives etc.

That said, I’m still open minded about it and will keep a close eye on what they’re going to do. They better give more details soon.

A message from Kitase about the multi-part series decision.

With FINAL FANTASY VII REMAKE, we have the opportunity to go beyond the story, world and experience of FINAL FANTASY VII in ways we’ve always dreamed of - from the depths of Midgar to the skies above the Planet. The multi-part format enables us to expand the original story and turn it into an epic experience for fans and new gamers alike.

This past weekend at PlayStation Experience we were thrilled to present more of FINAL FANTASY VII REMAKE. It was great to see so much excitement when we surprised everyone with the first gameplay footage and it was a treat for us to show that development is going well, and further along than perhaps many had realised. Just like when we revealed the announcement trailer at E3 earlier this year, we like surprising you.

One thing that we wanted to be clear about during this weekend to accompany the new trailer was the scale of this project. We wanted to tell you this now and not in the future so that you’d share our vision for what we want to deliver. The biggest reason why we haven’t done a remake until now is because it’s a massive undertaking to reconstruct FINAL FANTASY VII from the ground up with the current technology. Producing a proper HD remake of FINAL FANTASY VII that maintains the same feeling of density of the original would result in a volume of content that couldn’t possibly fit into one instalment.

We’ve seen everyone’s comments and reactions to the news that FINAL FANTASY VII REMAKE will be a multi-part series and many have speculated correctly as to the reason why we have made this decision. If we were to try to fit everything from the original into one remake instalment, we would have to cut various parts and create a condensed version of FINAL FANTASY VII. We knew none of you would have wanted that.

I hope that by explaining a little more about our design decisions that you can appreciate the size of this project and what we have planned for this remake. Going beyond the scale and depth of the world, narrative and gameplay from the original to deliver something that feels familiar yet new. As I said before, we like delivering surprises.

See you all soon and Happy Holidays!
Yoshinori Kitase

I don’t know. I mean, they made FF13 but that was arguably a bad idea. Having it in two parts would probably be more responsible and it wouldn’t take as long to come out. They’d also see a return on their investment sooner instead of spending like how many years on a single game? The timing of this is really bad though, both FFXV and KH3 aren’t even out yet. In fact, this whole thing may have been a bad idea from the start.

Yoshinori Kitase’s message used the right tone to address the complaints. It doesn’t matter what they say at this point in time though, it’s just playing with words to control the hype. Once the games are out, then everything will be clear.

If I believe everything that’s being said blindly, then it would be great to have the games with the same amount of content of the original and lots of new content added to make all of the games just as lengthy and worth it.

What I’m fearing right now is the games being cut into pieces and just add cheap ‘new content’ to try and justify the price. Fleshing out Biggs, Wedge, and Jessie is a good idea. I like those characters. Cloud’s hallucination scenes will need clarification as well. I’m for that.