So. It's finally happened.

I didn’t make it.

Really? I found it to be hard to use, especially because of the formatting of topic threads. 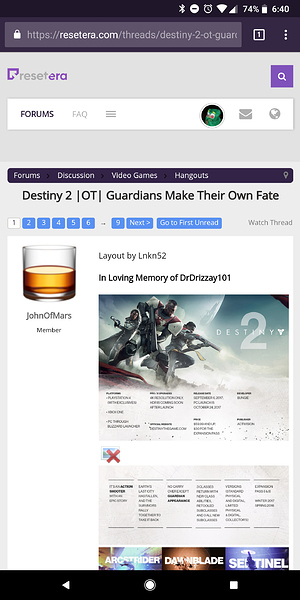 Everything feels so modern. The way your posts appear in a thread and seem to update in real time, the way the fonts and text just mesh so well together. It feels so much better than GAF ever did.

Looks like it may have something to do with a position:fixed element? I haven’t cared about making web sites since 2008.

The issue is just that they haven’t made much modifications for mobile. The avatars are too big and they should be above the post not next to it.

It is readable, but still not great.

Obviously I am opinionated.

Luckily I don’t feel the need to be a perfectionist about this at the moment. I can’t imagine how annoying this stuff must be for you professionally. Though I guess you’ve also figured a lot of this shit out already,

Eh, I’d expect as much in the time they’ve had. Though setting up xenforo on hosting with some customizations isn’t that hard in the grand scope of things.

The feature request thread is crazy, I really doubt someone is going through and reading it all. Well I would if it were my forum, I did when we had them before.

It’s crazy how many signups they had, I feel like they took the vast majority of the quality posters GAF had, I didn’t expect so many signups so soon. Crazy. How many did we have at our peak way back in the day? I feel like maybe 100? I remember Costanza shitting all over me because I liked the Green Album by Weezer

Neogaf is in such a sad state right now, It makes me actually feel kinda bummed. That site was a large part of much of my life. Since I was a teen in the early 2000s, man. The way it went out is so sad too. I can’t even imagine what evilore is thinking right now, but I’d love to find out

Had a total of 1k users on OG WYL. Not sure on peak at a time.

We didn’t have the numbers, but we had the class, dignity, and sex appeal. Still do, baby.

Happens when you get journalist Gaffers constantly mention your site’s name in articles relating to Evilore’s downfall.

In any case, already off to a bad start. It’s just like gaf again. Giving views so someone else can make money off our forum activity. Fuck that.

I’ll sign up for ResetEra once I am allowed.

I already signed up for three other forums, although I will probably not frequent any of them.

It’s too bad WYL never took off like RE did. This forum had/has much potential. I like the minimalist forum design here.

The gaming industry is as closed off as the movie one. The only reason Reset is having members is because journos/gaf mods are members of it. It’s a celebrity circle.

Eh, I’d expect as much in the time they’ve had. Though setting up xenforo on hosting with some customizations isn’t that hard in the grand scope of things.

The feature request thread is crazy, I really doubt someone is going through and reading it all. Well I would if it were my forum, I did when we had them before.

Well, that’s because you sir are amazing. Always trying to get this site better despite it not being as active as one might hope. And you never let us down :3 You knowing your stuff is just a bonus.

In any case, already off to a bad start. It’s just like gaf again. Giving views so someone else can make money off our forum activity. Fuck that.

Why the hostility? They might be making money but if they’re doing a good job and are treating their members better, then what does it matter?

It’s too bad WYL never took off like RE did. This forum had/has much potential. I like the minimalist forum design here.

Yes, it really is unfortunate. I liked if this place was more active but I’m not letting it down as long as possible. This place has always felt like home, a place to return to along with ups and downs which makes it authentic.

As for why they made it…I don’t think it’s just the popular names or celebrities. There are three reasons: timing, better organised and keeping the spirit of GAF’s functionality. Timing is obviously important with the allegation and they seem to have learned from other websites for their launch. They seemed to have come prepared by staying in touch with the community on discord. In terms of functionally I mean the way the site looks and the simple lay-out. Many people don’t realise this, when others started a new website they wanted to have the newest technology and be slick and all, but GAF was embraced for being very easy read and the lay-out not being cluttered despite being outdated etc.

Having been in an active GAF community during and after all the shit on GAF this weekend I can say that is not the case at all. It wasn’t 100% but the majority of the Discord server I was on were disillusioned about things and after the site was down for as long as it was they had largely come to the conclusion that GAF (at least to them) was dead.

Once it came back and after what EL said officially on the site as well as through the press, that committed them to finding a new home. There was a vote and the Discord renamed itself to something that did not include GAF in the name and before anything official about ERA came out.

Once ERA was announced and reached out to the communities, one of the mods from the Discord was relaying information about the process of vetting and invites as it came out. They also took votes on if the community should affiliate with ERA or not.

Hello @everyone, Reset ERA is a replacement board set up by prior GAF alums such as Nibellion, Shinobi64 and Emily Rogers and more. We will keep our Discord regardless of what we decide to do. So what I need now is to hear from DGAF what your opinions are on joining Reset ERA:
Please respond with emojis:
A) I am interested in DGAF becoming Destiny ERA
B) I want this community to be forum-agnostic, and people can join where they want
C) I want to wait and see how RetroERA turns out first
Note: voting via emoji is public. If you have concerns you want to voice in private, you can DM one of the mod team, including me.

The point I’m trying to make in this reply is that the communities (assuming they has similar reactions) opted to move to ERA for their own reasons and to have a new home. Not because of journalists or game devs. That would only further cement that for sure but is not the only reason.

It has no advertising right now, and they say they haven’t put much thought into monetization, but are entertaining threads on that topic, not shutting them down. I don’t know what they will do and I won’t pretend to think they will do the right thing.

I personally am sceptical about the leadership and not sure if it will survive. I am only there because I like to read content and I can’t lie that it is exciting to see everyone’s excitement over a new community forming.

My hope is that they are open about how they plan to make money to support the forum, and use something other than just advertising to do it.

Also I have become so used to WYL that using Xenforo is very annoying. Screw pages… One thing I like about our little home is that I know everyone and a lot of times when a thread or topic pops up I am waiting to see how everyone responds in their own unique way.

My hope is that they are open about how they plan to make money to support the forum, and use something other than just advertising to do it.

Sorry for sounding uneducated about this, but how can they make money besides advertising?

I think it’s important for them to make it transparent that no one is looking to profit immensely from any revenue that is acquired through forum activity, and to drive that point home by setting up a system where any revenue is redistributed towards forum costs or upgrades or perhaps even donating to charities for funds leftover. GAF turned into what it did because one man made off like a bandit, and because of that, his greed made a series of bad decisions for GAF over the years.