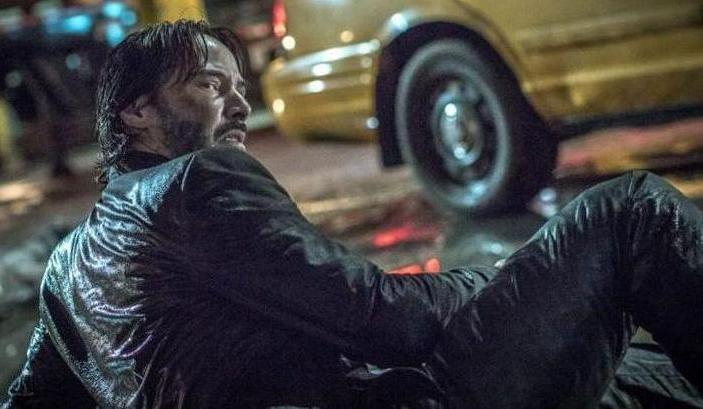 For the most part, I felt that this was what you want to see in a sequel; a bigger, better experience than the (slightly) underwhelming original, John Wick 2 builds upon the base established by its predecessor and runs with it, upping the ante with a larger, more international globetrotting scale to the story, which does a good job of following up the fallout from the first while also planting the seeds for a sequel that the film itself pretty much admits is inevitable, as well as giving us more tantilizing glimpses of the colorful underworld created in the first film, and of course, more action, not just in terms of the quantity of carnage, but the sheer brutality of it as well, as things get a lot down and dirtier here, with a bigger emphasis on gore, and more visceral and intimate hand-to-hand bloodletting.

The only real complaint I had with it was with the sometimes uneven pacing, which fluctuated between slightly repetitive scenes of action and somewhat overlong scenes of, er, non-action, as if the (now solo-directing) Chad Stahelski was trying to justify the gratituity of the carnage by unnecessarily stretching out the quieter moments of dialogue and plot setup inbetween. That being said, the movie is still more confidently executed than the original, with a stronger sense of personality, which goes a ways toward pulling us through the occasional lull, with more badass/eccentric supporting characters, such as Common as a vengeful fellow assassin gunning for Wick, Ruby Rose as an icy, deaf hitwoman who exclusively communicates through sign language (giving the film more excuses to squeeze in even more comic book-style subtitles), and fellow Matrix alumni Lawrence Fishburne reuniting with Keanu in the role of a homeless assassin king who has an entire network of “beggers” working for him throughout NYC.

And, while one could criticize the film’s emphasis on faceless, disposable baddies that attack the title character in sometimes endless, predictable waves, or John’s repeated usage of a couple of basic moves to dispatch most of them, which makes him seem like a live-action video game character, there’s enough visual variety, gallows humor, and memorable, punctuating (and puncturing) moments throughout to keep the movie from becoming too tiresome at any point. Besides, the gratitiousness is kind of the whole point of the film; like the original, John Wick 2 is sheer action movie porn, with no greater purpose to exist but to serve as a pure love letter to the genre as a whole, which it succeeds in doing very enjoyably. At one point, John says “You wanted me back… I’m back!”, and all I could think in response was “Yes we did, Mr. Wick, and yes, you most certainly are”.

I’m watching Manchester by the sea and how the fuck did casey affleck win the Oscar?? He’s def not good in this

Gonna see Get Out tomorrow night. Coincidentally, that’s also what I’ll be doing for once.

Ok second half was better, but damn that was a very rough start 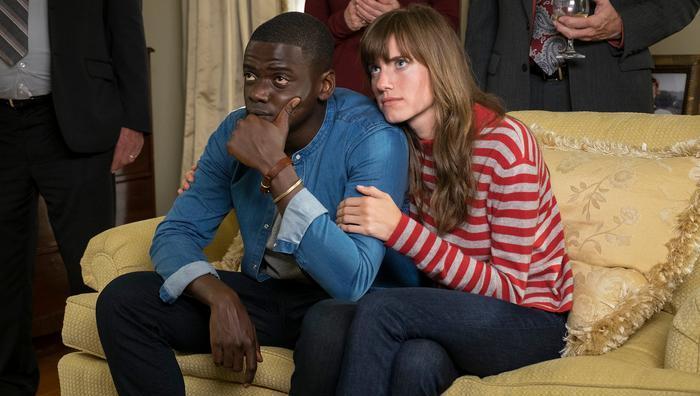 For the first two acts of Get Out, first-time writer/director Jordan Peele (best known for the Comedy Central skit show Key & Peele) shows a decent amount of skill in creating a generally creepy, unsettling atmosphere, and instilling within us a genuine feeling of unease, as he sets up the story of Chris, a young black photographer meeting his white girlfriend’s parents for the first time, as he spends a weekend at their large, seemingly idyllic suburban home. Some awkward, possibly unintentional racial tension happens between Chris, the family, and their stuffy, upper-class neighbors (almost all white themselves, of course), but nothing really out-and-out threatening happens during this part of the film, and save for the occasionally disconcerting moment, you could almost fool yourself into thinking that Get Out is basically just a 2017 remake of Guess Who’s Coming To Dinner?.

That is, except for the continually odd behavior of all the other black people in the neighborhood, including Walter, the landscaper, Georgina, the family housekeeper, and Logan, a neighbor married to a white woman much, much older than himself, as all of them either act nothing like “black people”, or just nothing like people, period. The two domestic servants behave like, well, a white person’s idea of how a black servant should act, unfailingly chipper and docile towards everyone else, but in a way that’s incredibly stiff and unnatural at the same time, as if there’s something just underneath their surface just screaming to get out, which hints at a 3rd act twist that I genuinely didn’t see coming at all whatsoever (hint: it’s not the twist you guess at first, believe me).

[spoiler]Which brings me to the bonkers final act of the film, which is gory, over-the-top, B-Horror fun, and helps to retroactively justify everything that happened before it. Don’t get me wrong, as, like I wrote earlier, Peele does do a pretty good job with the surprisingly subdued beginning and middle of the film, which, for basic story reasons, just wouldn’t have worked in a more in-your-face style (an early jump scare involving an animal is more Peele awaringly mocking the tendency of Horror hacks to put such unnecessary scares in their films, rather than him being such a hack himself). That being said, even though the overall film is less than 2 hours, the pacing early on is still a bit too slow at times, with a reliance on a somewhat vague atmosphere of unease, with few concrete story developments happening, all of which are elements that could’ve contributed to a disappointing film if the finale didn’t end up delivering on the overall potential of the experience.

However, like I said, the 3rd act of the film does end up delivering, throwing us a relatively novel story curveball that makes us reassess everything we’ve seen up to that point, while simultaneously balancing that out with the bloody, shocking jolts we’ve been waiting for, but in a way that prevents the movie from becoming mindless schlock, as the visceral horrors are happening side-by-side onscreen at the same time as the intriguing new story details are developing, sharing space with them and adding a whole new dimension to the overall experience.[/spoiler] In the end, Get Out isn’t a perfect film, as it obviously took a while to start clicking with me, and if you wanna nitpick, a certain comedy relief supporting character sticks out like he’s a sore thumb left over from an unaired sketch on Peele’s old show, but it’s ultimately pretty skilled, scary material, and am now wondering who else in the TV skits world could possibly break out into Horror films; someone from SNL, start working on a ghost movie, asap! 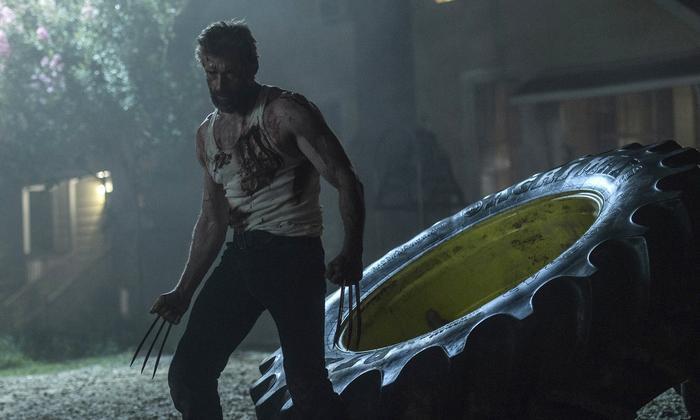 Logan may seem like an oddly minimalist, unusual title for what is (supposedly) Hugh Jackman’s final hurrah playing what has become the most iconic of onscreen X-Men, Wolverine, but when you actually see this, hopefully you’ll understand why they simply titled it after the character’s real name, and have no more qualms with it than I did. After all, this is a very unusual, minimalist X-Men film itself, drawing a mythic strength not only from Jackman’s long-running portrayal of the character onscreen, but also from the more than 40-year legacy of Wolverine in the comics (in one particularly clever, self-aware twist), while also simultaneously humanizing him more than we’ve ever seen him before, stripping the Wolverine down to his bare, adamantium-bonded bones.

When we first see Logan in Logan, he’s barely scraping together a living as an on-call limousine driver in Texas (driving a leased-out limo, to boot), fueled more by constant alcohol than rage, and noticeably older, his legendary regenerative healing working much slower than ever before, as he’s barely able to fend off a group of thugs trying to steal his hubcaps. He chauffeurs around rich assholes, boorish fratboys, and drunken bachelorettes to and fro for a living, barely able to afford the black market meds he desperately needs to smuggle into Mexico, where he hopes to keep an increasingly senile and demented Charles Xavier from destroying mankind in a devastatingly final psychic wave, as he saves every penny he earns in the vain hope of purchasing a yacht someday so he and “Professor X” may live out the rest of their days in some ridiculous, idyllic existence on the sea.

So yeah, he is definitely not the beclawed badass we saw stylishly carve off a piece of the Statue Of Liberty’s crown all those years ago; he is a broken “Wolverine” here, struggling to survive in a near future where mutants have mysteriously become nearly extinct. However, all of that changes when he runs across a young girl with powers strikingly similar to his own, a girl Logan is (extremely reluctantly) drawn into protecting from a ominous multinational corporation and its army of assassins, as the film takes us on a truly epic journey all the way from the unforgiving deserts of Mexico to the snowy mountains of Canada, giving Logan something real to live for for the first time in a very, very long time.

But, despite this epic scope and its over 2-hour runtime, Logan derives most of its strength from how down-to-Earth and just plain human it really is, despite being about mutants. Although it takes place over a decade into the future, there are no absurd, obscenely high-tech facilities or fancy pants “schools for the gifted” in sight here, rather, the settings of its multinational journey are gas stations, quaint farm houses, and the tiny, one horse towns of Middle America; in other words, this is X-Men in the real world, for real. But, more importantly than that, Logan always has a devastatingly intimate and personal focus on its characters, showing a sense of genuine pathos and emotional maturity that, is not only rare to see in a superhero film, but is just rare to see in film, period. The characters of Logan aren’t the kind of living action figures you might have seen elsewhere, but are real, live, actual people, with very real pains and emotions, and, as they suffer and hope onscreen, so too did I, suffering and hoping right alongside them. This is probably the best X-Men movie to date, possibly ever, even, and for a eulogy for everyone’s favorite Canadian rodent, I don’t think you could’ve expected a better one than you get in Logan. Go see it, right fucking now.

Iron Fist is pretty good. It reminds me of Arrow before it turned all silly.

It, uh, seems not good, and for many of the reasons I had read about. I think I would rather have more Luke Cage.

I’m only three episodes in but I think it has potential.

I am beyond burnt out on anything superhero.

But I still wanna see Logan.

I watched Rogue One and I won’t remember it in like a month.

Yep. Coulda just left it at the bothans.

The Bothans thing is frustrating because whomever uses it as a defense of how Rogue One is “bad” are showing they haven’t given enough attention to the timeline of the Star Wars movies.

Idk what you’re talking about which perhaps demonstrates how much the movie’s plot engaged me.

I watched the first episode of the new Chappelle Netflix special and it was okay. Stand up comedy is not easy and I can’t remember any longer show that wasn’t filled with many boring parts.

Oh. Eh whatever. The main point is that it’s forgettable.

Iron Fist is indeed quite bad.